The Truth About the New John Deere Gator RSX850i On July 10, 2012, John Deere invited around 30 individuals from various media outlets to come to Moab, Utah to see and test their brand new Gator RSX850i side-by-side recreational utility vehicle (RUV).  I was lucky enough to score one of those invites, and it was an epic two day event that still has me smiling.

Sure, I was excited to see the new high-performance Gator RSX before it was introduced to the general public, but I was really amped at the prospect of giving the new Gator a true desert test.

After our introductions to the machines and after a thorough safety briefing from a John Deere representative, we were given one rule regarding the treatment of the vehicles, “Don’t be shy with them,” said the smiling and winking JD rep.

Are you kidding me? We had the keys to one of the coolest new machines on the market, full tanks of fuel, and we were allowed to go ride in the baddest off-road vehicle proving grounds in the world set against the ultimate scenic backdrop of orange arches, red rocks and blue skies! Are you kidding me?

Before my brain could fully process this unique opportunity, I was mashing the gas in a cloud of dust trying to keep up with the other kids-in-adult-bodies in my group.  We were split up into three riding groups, so we had these miniature crazy convoys tearing through the desert on the endless approved trails made up of sand, loose rock, water, mud, and slick rock.

A couple of times I expressed my guilt at thrashing a vehicle that did not belong to me, but all the John Deere representatives laughed and assured me that they wanted us to ‘get the truth’ out of these machines.  Fine with me. After those reassurances, I began to push a little harder, go a little faster, and I began to free myself from the limitations of guilt and ride to my full potential.

If the Gators I drove had brains and souls, they would need a lifetime of counseling after the abuse I 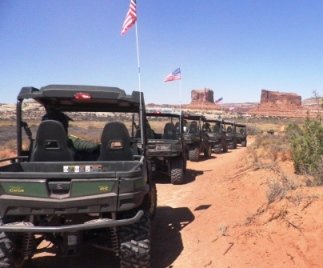 put them through. I climbed rock structures that no 4-wheeler could ever attempt. I slid around silt corners, went airborne off washboard ramps, ran over big nasties in the form of razor sharp rocks, and I think I turned some sand into glass as I white-knuckled my way through the Utah desert without a care in the world. The new Gator RSX is bullet proof.

There were approximately 40 Gator RSX vehicles put through the ringer those two days. The RSX850i Sport, Base, and Trail models were all there. Of those, I only saw one break-down which I later found out was caused by a tire getting punctured by a sharp rock.  In my opinion, every single vehicle should have had multiple tire punctures, bent frames, and worn out parts, but it never happened.  The unfailing consistency of all the Gator RSX machines was a phenomenal testament to John Deere’s engineering.

When my six-plus hours of ‘riding’ the new John Deere Gator RSX850i came to an end, I wanted the world to know what a gem John Deere had created. Wars could be won with the New Gator RSX, and that’s the truth.