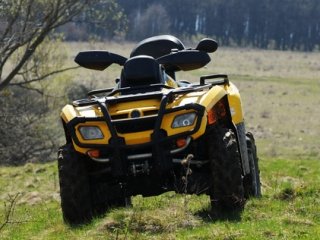 Buying  new vs. used is an age old debate when it comes to anything with a motor. Where vehicles are concerned, I believe in buying used. Not junker, 1960’s model used, but low miles, great value used. However, when it comes to things like ATV’s, jet skis and boats I tend to be a little more weary of the term “used,” since in my household used can also quickly translate into “ran through thousands of mud puddles, rarely cleaned right after use and rode hard.”  That, however, doesn’t mean that used equipment is all bad.

While shiny and new is nice, used and new-to-you can also be just as satisfying and kinder to your bankroll.

The Skinny on New

There’s something fulfilling about sitting your hind end on a piece of vinyl that no one else ever has. It is always nice to know that the hours put on your toy are ones that have been under your control, which is one of the real upsides to buying new equipment: you know where it has been, how it has been treated, and you’ll typically have some kind of manufacturer’s warranty to cover anything that goes wrong. Another major positive to new purchases is the ability to choose options like specific size, color, and any extra goodies that you want straight from the dealer.

However, there is one major pitfall to new: cash. Via some not-so-extensive research I have it on good authority that very few people in the history of the earth have ever sold a used ATV, jet ski, boat or food processor for that matter, for the same price they paid for it new. That’s just not how the used market works. Thus, if you plan to buy new, also plan to lose some money to depreciation, starting the moment you haul your new toy off the lot, if you ever decide to sell.

The Low-Down on Used

I like saving money. As in, I’m that lady at the table on Sunday totally stoked about a $1.00 off coupon for shampoo. Cha-ching! That said, it’s not surprising that I like buying motorized equipment used. The benefits to buying used equipment include, most obviously, the cost savings. What that first guy lost in value when he drove off the lot, you gain in savings associated with the used resale price. However, there are also a few pitfalls that need to be considered.

Most importantly is prior use. The thing about used stuff is that you never really know where its been, how its been maintained and problems its encountered. Regardless of the fact that Jim Bob’s Craigslist posting claims the quad has been ridden only “occasionally” and “on trail” with self-maintenance done on a religious schedule, the truth may be just the opposite. Thus, it’s important when buying used to use your noggin. Always see a rig in person before you purchase, look at the motor, suspension and undercarriage thoroughly. Ask about anything suspicions that you see. If Jim Bob can’t explain why things in the motor compartment are covered in oil, it’s probably a good idea to trust that gut feeling. Ask to see maintenance records, or receipts, and remember: if it seems to good to be true, it is. And you don’t want to spend your cash on a lemon.

Although, while private party sales have no return policy, you may be able to find a used machine at a dealer with a little more warranty of quality behind it. You’ll also be more likely to get a machine that has been thoroughly inspected and serviced prior to sale – which is a nice perk, especially if you don’t want to find a need for major repairs right after purchase.

The Choice Is Yours

Buying new or used is as personal as the choice between boxer or briefs, mayonnaise or Miracle Whip, bacon or sausage – each person has a preference that they’ll likely stick to for most motorized purchases. Myself? I’m a mayo and used kind of gal. However, there’s nothing wrong if you’re a Miracle Whip man. Just be sure that the route you go is right for you, and your pocketbook.