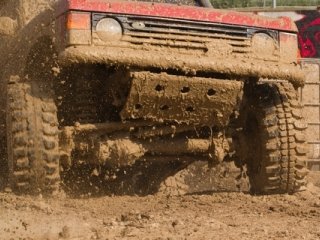 Ask any 6 year old what their favorite car is, and they’ll likely tell you it’s a monster truck. For some guys (and  gals) that answer doesn’t change by the time they’re 26 or 56 and visions of what was once a roaring behemoth crushing school buses transform into dreams of a well-equipped pick-up ruling dirt roads.

For off-road enthusiasts, four-wheel drive trucks and SUV’s are merely foundations for what could be a trail-tackling, mud bogging, rock crawling super machine. While much of the off-road community is comprised of life-long gearheads who can tell you the exact year that Toyota began using indepdent front suspension, not everyone who wants to get into four-wheel drive off-roading has grown up with dirt under their fingernails. And there’s nothing wrong with that.

With a little bit of research, cash, and enthusiasm, even a novice can be on the road to successfully piecing together a trail king. Here’s how:

Before you even start shopping for a rig to use as your base, it is more than important to do your research. It’s imperative. Dire. Required. A must, if you will. Why? Anybody can browse Craigslist and buy the first good deal they see on a well-written post by a veteran redneck salesman. The issue is that there are so many options and variables to consider when buying a 4×4 vehicle that it’s mind boggling. Do you want a straight axle, or independent from suspension? Fuel injected or carbureted? Pick-up or SUV?

By researching ahead of time, you’ll find out what’s worked for other people, and begin to determine your own preferences. When the time comes to make a purchase, you’ll be able to search for vehicles with certain specifications and know which questions to ask to make sure that you don’t end up with Jim Bob’s last project gone wrong.

“But,” you ask, “how am I supposed to do such in-depth research when I don’t know an axle from a tie rod?” Modern technology, combined with the old adage of learning by doing, can increase a newbie’s knowledge in no time. Online discussion boards and automotive websites are a stellar place to learn the basics and ask questions unabashedly. However, hooking up with a buddy who off-roads (which can also be easily found online) or a local 4-wheel drive club can present the opportunity to get out on the trail, see how things perform and ask questions of veterans. And if you make those veterans  your friends, they might also be the helping hand you need to reach the last bolt on your lift kit down the road.

I’m not going to lie to you: very few people have any idea how much they’ve spent in the process of building their rig. In fact, I have a truck in the driveway that I would guess we’ve knowingly spent at least $15,000 on over the years. I would also estimate there’s another five grand in random parts my husband bartered with folks for. And another 5K that I prefer to forget we ever spent. That’s how vehicles go: they’re money pits that will eat away at your savings if your wife isn’t a voice of reason. However, I highly recommend making a budget to start. I’m not saying to stick to it for life, but be prepared to get what you need to get started: a vehicle, anything needed to get it running if it’s not in operable condition, perhaps a lift kit and proper tires, if need be.

Obviously, the last few items can be bought over time, but you’ll want to be prepared for the expenditures over the first year or so, so that you’re not stuck with a truck in the garage that still doesn’t let you get out on the trail.

While the first two steps sound more like planning for a wedding than building an off road rig, they’ll lay the foundation for a solid build that fits your style and budget. In part 2, we’ll disuss the next steps and getting down to the nitty gritty.