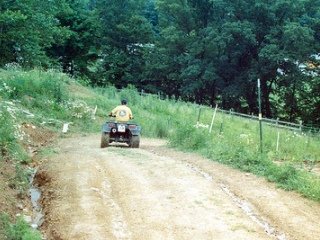 Zerbe Township, Pennsylvania is dealing with a problem familiar to rural areas throughout the country. Over the past year, the municipality has worked on raising the funds to build and staff an off-road park on a plot of County land where ATV and four wheel drive enthusiasts already frequent. What is now a 6,500 acre plot of reclaimed coal land would be transformed into an off-road haven, complete with safety and security patrols, as well as the requirement for users to sign a waiver and buy an annual pass to contribute to the maintenance costs of the park.

As a native of rural America, I find Zerb Township’s idea brilliant.

Thousands of small towns across this great land have a local “spot.” What appears to be a dry creek bed, old mine site or abandoned mud pit to some is, in fact, a local destination for off road enthusiasts of all ages, skill levels and, unfortunately, intentions. A landscape that can appear innocent in the daylight has the potential to transform to a hangout for what my grandmother would have called “scoundrels” in the cover of night.

Although responsible off roaders typically don’t pose an issue at these local hot spots, there is an overwhelming potential for unwanted behavior. Like what? Underage drinking, over age drinking, illicit drug use, littering on a massive scale, fights to rival those of any honky tonk and an array of other crimes that can take place in hundreds, or thousands of acres or free-for-all territory.

Zerb Township is looking to reclaim a safe, managed environment for off roaders in their re-claimed coal mining land after a series of fights that left individuals seriously injured. And I can’t help but think that they’re not the only ones. Where I come from it’s Greenhorn Creek; an expansive creekbed and thousands of acres of BLM land dotted with private holdings. Personally, I know two individuals who had their trucks stripped and lit on fire – you heard me, lit on fire, after they got stuck near dark and hiked to a main road for cell service in this infamous local landcape.

While gates and fences won’t work, ideas like that of the folks in Pennsylvania seem to hold some salt. By paying a small entry fee and employing individuals and volunteers to patrol the area will surely bring an air of official presence and deter the riff raff, scoundrels and ne’er-do-wells to take their shenanigans elsewhere. Surely, we live in a time of harsh budget restrictions and lack of funding complaints from every cause, but efforts from four wheel clubs and local governments may be a first step to reclaiming our local landmarks for family four wheeling, and reduce the risk of finding your rig in a ball of flames when your buddy finally hows up with a winch.