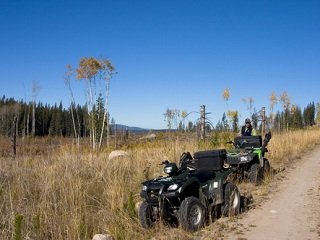 Deer. Elk. Moose. Duck. They all better be on the lookout. It’s that time of year again when avid outdoorsmen and women can finally put their past year of scouting and target practice to use. As various hunting seasons open across the country, there is no shortage of hunters putting their ATV’s to use as an important tool in the quest to stock their freezers and decorate the walls with a big, new rack.

While the vast majority of hunters are also avid conservationists who understand that in order to have populations to hunt we must take  care of the land where these animals thrive, the thrill of the hunt can sometimes have an effect on a hunter’s better judgment when it comes to properly using their ride while hunting.

Here are some basic tips to remember when your ATV is just as important as your gun (or bow, for that matter) when it’s time to go bag some big game.

Stay on designated trails:
When hunting on public lands it is incredibly important to be aware of the OHV rules in the area and stay on designated trail. Public officials have expressed concern in certain instances of a hunter venturing off trail to retrieve game, leaving signs of use behind, and thus tempting other hunters to do the same. While one ATV off road likely won’t kill off the common ground squirrel, the cumulative impact of thousands of hunters going off trail can do some definite damage to potentially sensitive areas.

Don’t shoot:
In most states, shooting from an ATV (or any motor vehicle) is illegal and can nab you a hefty fine if the game warden is nearby. When it’s time to take your shot, allow yourself enough leeway to stop, get on the ground and safely access your weapon.

Watch for hunters on foot:
Remember that while you’re riding, there may also be hunters in the same area on foot. And if there’s a popular time to be in the woods, it’s now. Be aware when rounding blind corners and riding in poor visibility near dusk or dawn that there may always be another body nearby! And I’m just guessing nobody pulled a tag this year for male humans. We want animals down; not fellow hunters.

Park it:
In line with the concern about venturing off trail, hunters should park their rigs in a safe location when scouting on foot or venturing out to retrieve downed game. Ideally, park your ATV in a location where other riders can get around you and never park in a blind spot to prevent your ride from being in a collision without you while you’re retrieving your prize.

Know where you can ride:
OHV regulations differ widely from state to state and can even change during hunting season opposed to the rest of the year. Be sure to check in with your Forest Service or BLM field office before venturing out to hunt on public lands (or even near them) to ensure you don’t accidentally start breaking the rules. Even things like the width of your vehicle, if using a UTV, can determine what trails you’re allowed to drive – so take the time to research. A ticket can ruin the mood in a hurry.

With the rules out of the way, here’s a wish for happy hunting to each and every one of you. Keep those eyes sharp and your shots true. And keep that ATV on the trail, will you, please?