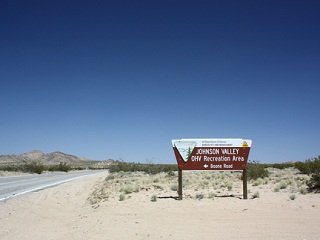 There’s off road racing and then there’s off road racing that makes you look twice. With trucks that widen the eyes of small children and grown men alike, and a course that is quite likely the toughest in American off-road racing, King of the Hammers is an epic 4×4 event that happens early each year in Southern California’s Johnson Valley.

Most recognized for a crazy class of off road trucks known as “Ultra 4’s,” King of the Hammers features rigs that may have started out as a Ford F-150, and reach this race as a mere replica of their former selves, with the only OEM piece likely being the gas pedal. However, beyond acting as home to this famed off-road spectacle, Johnson Valley is a year-round Mecca for off-road enthusiasts. Currently managed by the Bureau of Land Management, Johnson Valley is part of a vast system of public lands that have become havens for getting off of the pavement across the United States.

However, in recent years, Johnson Valley – and thus, The Hammers – have come in danger of being taken out of the hands of the public and invaded by the…Marines. You know, the United States Marine Corps? One of the most respected branches of American military; surely respected by the vast majority of off-road enthusiasts. While loving your country and getting muddy have always gone hand in hand, the argument over Johnson Valley is not one of military support or not, but rather an intricate political dance around the public’s right to continue to utilize nearly 140,000 acres of prime BLM recreational land.

Here’s the short story: The Marines are proposing taking over 100,000 acres of the Johnson Valley BLM area as an expansion of their adjacent base. An additional 40,000 acres would be utilized by the Marines and shared with the public 10 months each year. However, advocates within the group “Save the Hammers” express concern on their website that the Marines have never had an arrangement to share base land with civilians, and worry that such a plan may not even be feasible (or reasonable.)

Currently, advocates of Johnson Valley are working with supporters to lobby congressional representatives and make their voices heard. In August, a final environmental impact statement was released, and in order to move forward, Congress has required additional assessments on potential economic and recreational implications of removing the land from public use. While there’s no doubt that protecting our country is a vital function; supporters contend that Marine forces have managed increase deployments without the additional land – and let’s face it, 140,000 acres of land is a vast chunk of dirt by any means of measurement.

Whether or not Johnson Valley will remain the home of King of the Hammers, as well as a year-round destination for Southern California four wheelers, is still an unanswered question. However, one thing is sure: regardless of the outcome, the effort to Save the Hammers is another stark reminder that as off-road enthusiasts, we have a duty to remain aware of management plans and activities on the lands we love to ride. While off-roading may simply seem like a bunch of rubber, mud and rocks, the reality is that in today’s world, there are constant political and environmental efforts to keep this pastime open to Americans on public lands.

So do your part and remember to work advocacy for public off-road use into your hobby, just the same as you do an oil change…. It’s all of equal importance.