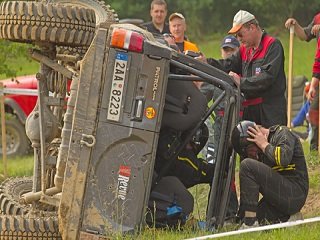 Last night my husband and I plopped down on the couch with a bowl of popcorn and one of those video clip shows that feature occurrences someone just happened to catch on tape out of dumb luck. For nearly half an hour, we watched people like ourselves get trapped in sticky off-road situations that made us glad we weren’t in their shoes…or Jeep.

While all of the clips made me cringe, one in particular gave me a mild case of heart failure: a man navigating a rock obstacle in a mid-80’s Toyota pick-up turned a little too hard, causing his entire truck to roll. No big deal, right? Except for the fact that when the truck rolled back over, the man was outside the truck; lying on the trail after he had fallen out of the open window during the accident.

Like so many other off-roaders, this guy simply wasn’t wearing his seatbelt; likely figuring that he wasn’t in much danger at slow speeds on the rocky trail he was navigating. Seatbelts are only for highways, high speeds, and speeding traffic when you could collide with another car, right? Wrong.

So often, safety equipment for riding quads and dirt bikes—helmets, pads, riding pants, and jerseys—is taken to the extreme. However, when it comes to driving in four wheel drive vehicles, safety is reduced to a lesser extent. For some reason, when we’re surrounded by a roof and have a radio, our fear of imminent danger can be reduced. And that’s even more dangerous.

Rollover accidents are one of the most common incidents when it comes to four wheeling. Whether you’re navigating rock obstacles that require precision maneuvers, or the road you’re exploring is near the edge of an ominous drop-off, there is always a risk of an accident. While it may seem more likely that you’ll encounter grave danger on the road with other vehicles, driving off the beaten path with a few good buddies can present a different – yet just as risky – opportunity for disaster.

Strapping on that seatbelt gives you a greater chance of staying with your vehicle in case of an accident. Instead of falling out the open window, or door, seat belts will keep you strapped in and safe during a slow-speed rollover. You’ll be in the seat, rather than through the windshield when an unexpected short stop happens, and more importantly – you’ll have a higher chance of survival and reduced risk of serious injury when accidents on the trail do occur.

Consider this: If you’ll strap on a helmet before riding off into the woods on your quad, dirt bike or sled, there’s no sense in not buckling on a seatbelt before you venture out in your 4×4 rig. After all, dead guys can’t have any fun.