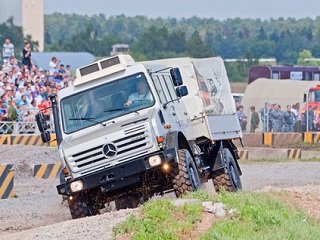 In the world of popular off-road motorsports there are the vehicles that populate everyone’s mind: quads, jacked up pick-ups, rock crawlers, dirt bikes, etc. However, as far as rides go that are capable of cutting it off the beaten path, there are some lesser known vehicles that possess not only an insane level of ability where off-road prowess is concerned, but simultaneously take off-road rigs to a whole new level of cool.

The Unimog:
Let’s start by taking a look at the Unimog; a big, bad off road dominator produced by none other than Mercedes Benz. Originally designed after World War II, the first Unimogs were designed as an agricultural workhorse, intended to act as a self-propelled mechanism for dragging machinery through fields or forests for farming and logging operations. However, with ultra-high ground clearance and giant wheels, the flexible suspension and frame of the Unimog makes it an ideal vehicle for off-road exploration in environments ranging from jungle to desert. And while you might expect this mighty big vehicle to carry quite the load, it is in fact designed to carry less weight, allowing for greater flexibility.

While Unimogs are most commonly found in Western Europe, if you’re on the hunt for an outrageous off-road rig, I don’t see any reason not to consider one. If you have the parking space, of course, and the homeowner’s association is open to the idea of one in your driveway.

The “Snowcat”:
Truth is, not all of the off road rigs of the world are equipped with wheels. When it comes to tackling snow, tracks can provide a welcome distribution of weight that gets large vehicles places that they were probably never meant to go. Take, for instance, the vehicle commonly referred to as a “snowcat.” With variations ranging from the Swedish Hagglunds (not available at Ikea) to the trail groomers that are typically seen sweeping the slopes of swanky ski resorts the world over, these tracked machines place a large cab on top of tracks that distribute weight over a far wider area than tires, allowing these machines to move around without sinking into the white stuff.

Beyond ski use, these off road winter warriors are popular choices for cold weather military operations, power companies with lines in rugged terrain and search teams looking for the occasional lost snowboarder during colder months. Do you need one? Probably not. If you have an outlandish stash of cash and want one, should you get one? Probably so.

The world of off road rides is constantly evolving. As new technology combines with old and innovation meets tradition, what’s next in off road vehicles is as unpredictable as the weather. However,  there’s no doubt that whatever it is will be cool…Just like the rides above that turn any grown man back to a little boy filled with wonder and thinking, “Wow! Look at THAT thing!”