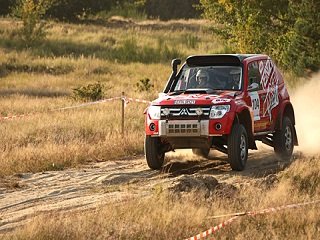 There are a handful of great museums that showcase off-road glory from trophy trucks to snow mobiles across the country, but there are also times that a museum takes on a special exhibit that truly appeals to the off-road masses.

Such is the case starting on May 4th at the famed Petersen Automotive Museum in Los Angeles, CA.

“Braving Baja, 1000 Miles to Glory” is a limited time display the museum, running May 4th through September 20th that will showcase some of the most significant vehicles in the famed Baja 1000’s history, including pioneer vehicles in the sport and major influencers throughout the years.

With nearly 50 years of Baja racing under the belt, there are a wealth of milestones to remember in Baja’s history – including the first timed run through the course by Parnelli Jones, Dave Elkins and Bill Robertson, Jr. in the early 60’s after Honda challenged its CL72 Scrambler to a 950-mile endurance ride through the harsh terrain of Mexico’s Baja peninsula.

The display will be included in the regular admission price of the museum, making it a great excuse for an extra stop on your vacation, or an outing for anyone located in the Southern California area.

With the 47th official running of the SCORE Baja 1000 happening November 14-17th in Ensenada, Baja, Mexico, the display offers a great opportunity to get jacked up for spectating at the late Fall race, or simply admire the advances that motorsports has made in the decades since the Baja was born.

Overall, displays like “Braving Baja, 1000 miles to Glory” give a startling reality check in regards to how far and how quickly motorsports advance. From fully-mechanical machines to the technology of today, the dirt bikes and buggies that beat the trail at Baja are a far cry from many of the trophy trucks that dominate the course today.

However, unlike much of society where technology seems to have disconnected us, advances in motorsports have brought an even greater desire to test the limits of the motorized and mechanical with a brotherhood of like-minded gearheads.

If you’re in the Los Angeles area this summer, pay homage to the off-road pioneers that granted us all the ability to dream of racing on dusty Mexican roads and stop by the Petersen Automotive Museum. Then do one better and go make some rooster tails in tribute to those that blazed trails before us.