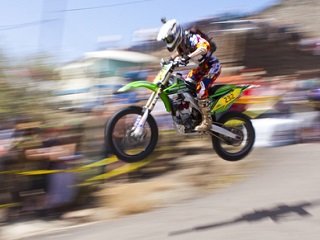 Normally, when we talk about dirt bikes, we’re referencing good times off-road with everyone from 4-year olds riding a 50 to grandpa’s, throwing rooster tails. However, it seems that in inner city areas dirt bikes are gaining ground as part of a subculture that forms “Dirtbike Gangs.” Am I the only one who has never heard of such a thing before?

I’ve seen three, maybe four neighborhood teenagers racing through orchards and popping the occasional wheelie, but the idea of an actual gang of individuals riding dirt bikes and wreaking havoc on city streets seemed like a far-fetched idea to me. Apparently for the residents of Baltimore the idea isn’t far-fetched, but rather an odd reality.

According to a recent article published online in the Baltimore Brew, residents and law enforcement are finding themselves having an increasing number of problems with massive numbers of dirt bikes and ATV’s creating traffic problems, clogging sidewalks and even prompting violent acts against motorists who “get in their way.”

Riders aren’t in it for off road recreation, but rather as a way of inner-city life that is intimidating to many citizens who won’t report activity in their neighborhood for fear of retaliation.

The “gangs” sparked so much interest that they have garnered major attention at the South by Southwest Film Festival where filmmaker Lofty Nathan highlighted the riders in his documentary “12 o’Clock Boys.” While Nathan contents that the riders use their riding as a platform for protest against tension between classes and a form of recreation, residents and police are fed up with the thug mentality of many of the riders and are vowing to take more action.

Recently, an anonymous email tip line was set up for residents to report off highway vehicle activity, and police are vowing to confiscate dirt bikes and ATV’s en masse when they are found. Currently, it is illegal to ride dirt bikes in Baltimore city limits – and with over 29% of seized dirt bikes being stolen, there’s hopes that new efforts will deter more riders from participating in the phenomenon.

With Baltimore representing one of the most economically depressed cities in the United States, it seems odd that lower-income populations would turn to off road vehicles on city streets as their battle cry to rebellion. However, with the culture continually gaining ground, there’s no doubt that without regulation and efforts to stop illegal riding and the activities associated with it now, future generations will continue the cycle of thug-style riding that causes accidents and fear among residents….A sad reality for a form of recreation that typically brings people together.

I don’t know about you, but I’ll be keeping my dirt bike gang off road, and likely won’t be adding Baltimore to my list of must-ride destinations anytime soon.