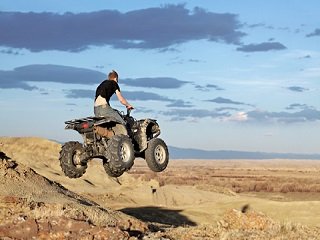 It seems that most people who enjoy off road activities do so with a core group of buddies. While riding is fun, riding with a group of friends is way more fun as you stock up your vault of “remember that one time…” stories. This past year it has become increasingly clear to me that nearly every group of off road buddies has that one guy. You know the one I’m talking about. The dude, or gal, who is willing to try just about anything.

He’s the one you send over jumps first to test the landing, the fastest one on the track and the only one willing to try out a trail the rest of the group deemed to narrow/steep/slick for this particular ride. Is he the dumbest? The bravest? Or the one who hasn’t completely eaten dirt at any time in his riding life? Who knows. The only thing that’s for sure is we all know him, and if you don’t, there’s a good chance it’s because you are him.

The guy in our riding group, let’s call him Bill, because it wouldn’t be right to completely call him out on the internet is a 20-something kid who is nothing but nice. If you met him in a grocery store, you’d think he was an easy going golfer, or perhaps someone who enjoyed a quiet afternoon of fly fishing. You’d be wrong. Horribly wrong. He’s a power-obsessed, over-driving maniac with a 900 cc UTV and a lack of fear.

Take last weekend, for example. All of us ride the same UTV’s, and are in the middle of a sales pitch to convince my in-laws they need one as well. In an effort to sell our point on how well the two seat models handle, we sent my father-in-law out for a ride with Bill. As we sat perched on a hill watching the two ride in the valley below, Bill’s fiancé let out a sudden expletive.

“Why is he going to do that!?” she grumbled after a choice word or two.

In a matter of seconds we watched as Bill and my 60-year-old father-in-law flew out from a grouping of trees, all four wheels lifting off the ground as they cleared a dirt road and approached a small landing area opposite the grove of trees. Before you could blink all of us looking on let out a collective, “Oh nooooooo…” in a loud, somewhat stunned chorus.

As the machine landed, the front wheels hit hard first into a small ditch, causing the rear end to follow without hitting the ground in what we like to refer to as a “lawn dart.” For a brief moment we all held our breaths as the lawn dart came dangerously close to continuing into the infamous “endo,” when machines begin to roll end over end.

By some stroke of luck, miracle or blessing by God, the rear wheels landed in an epic cloud of dust and Bill drove on as his significant other exclaimed, “If he did that with me in there, I’d kill him. For real.” I often encourage her to make sure his life insurance is paid up.

A short time later Bill and his rider pulled back up to our perch on the hill, smiling and no worse for the wear. My father-in-law had a tweaked back and a conviction that he definitely needed one of these things, as well as no idea how close he had come to going ass over tea kettle on his ride. Regardless of how rough the ride had looked to us as spectators, Bill had shown just what his machine could do when given the chance – and had a ball doing it.

While that one guy we all ride with always seems like the crazy one, perhaps they’re just the innovators. Bill always rides with a helmet, pays close attention to others and makes safety as a priority, but he pushes himself and his ride, which results in better stories and more fun for all of us. So here’s to “that guy.” He’s a necessary part of any off road crew.