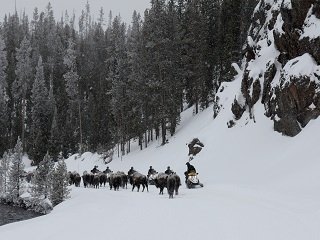 By no means are snowmobile enthusiasts rampant anti-environmental whackos. Nobody’s chopping down rainforests or running native people off of their land to mine for diamonds. Folks just want to be able to experience the natural wonders of winter on their sled – and one of the most unique places to take part in such an experience in the United States lies within the gates of Yellowstone National Park.

While snowmobiles have historically been allowed in the National Park during the winter months, the past 15 years have brought a long struggle between snowmobile tour operators in the park and environmentalists. However, in this scenario, parties were searching for common ground.

Snowmobile riding within Yellowstone National Park is a true wonder, with pristine snow covering miles of park roads where you can explore one of the true wonders of the West. Few other places on earth will you be held up on your ride by a herd of bison crossing the road. Fortunately, park officials recognize the uniqueness of the opportunity to ride a sled inside of Park boundaries and maintain recreational values of what is likely the country’s most famed wild landmark. However, as with previous minimal restrictions on winter snowmobile entry to the park, some years saw as many as 80,000 sleds ride through Yellowstone.

This large number of two stroke motors in the park created a serious noise and pollution problem that even snowmobile tour operators took issue with. The beauty of a ride like that offered in Yellowstone is the wonder of natural beauty, which becomes less appealing when fogged in a haze of two stroke exhaust.

To remedy the essential over population of snowmobiles during the winter months and reduce annoyances from noise and pollution that both sled riders, tourists and environmentalists found irritating, multiple use groups have finally reached an agreeable plan that will go into effect in December of 2014.

Under the new ruling, no more than 51 groups of snowmobilers will be allowed into the park daily, with no more than 10 machines per group – led by a permitted snowmobile operator in the park. This ruling allows riding to continue in the park, and give tourists ample opportunity to do so, without overwhelming the park with sleds.

Additionally, beginning in 2015, sleds allowed in will have to pass stringent noise and emissions tests. While some argue that there are few sleds on the current market that meet these requirements, snowmobile manufacturers have made significant improvements in regards to emissions and noise, with future model years expected to meet the standards put in place by the Yellowstone ruling.

For a fight that at one time saw Federal judges ban snowmobiles from the park altogether, to a time when park rangers resorted to wearing respirators to escape two stroke fumes, the long-term commitment of the National Park Service and other interested parties shows a major step forward in working together to protect both the pristine qualities and recreational values of America’s most treasured lands.