The black bear that walks upright in New Jersey, which captured worldwide media attention last year, has survived another winter.

The famous bear known as Pedals for his bi-pedal walking style was spotted in Oak Ridge, New Jersey confirming the beloved black bear was still getting on, though he may be injured.

Video posted to social media on a Facebook fan page for the bear show him walking across lawns in a New Jersey neighborhood. In some shots you can see blood on his lower left leg and side.

It’s believed that Pedals suffers from some sort of front leg injury or disease that has made them inoperable. This has likely made him ineffective at hunting, which draws him closer to neighborhoods to scavenge garbage, and therefore all the photos and video.

Calls to help the bear and relocate him to a wildlife sanctuary have continued to land on deaf ears by New Jersey wildlife officials who insist the bear is not in danger. Last year, more than 300,000 people signed a petition for the New Jersey Department of Fish and Wildlife to take action, but they still have not.

There continues to be outcry over helping this bear especially after recent photos show what might be an injury. There has been so many comments urging help that the Facebook page dedicated to “Pedals The Injured Bipedal Bear” continually posts a reminder that they have done all they can do.

“…we have fought an uphill battle and have exhausted all avenues,” the statement reads in all caps. “If Pedals’ condition deteriorates we will file a report with the NJDFW. The option will remain for him to be relocated to a sanctuary if the NJDFW ever deems it necessary but as of right now they do not feel he needs help. We appreciate all sugggestions and advice but we really have tried everything…”

And as for any of those other naysayers that have been calling Pedals a sow. There hereby is issued the following proof: 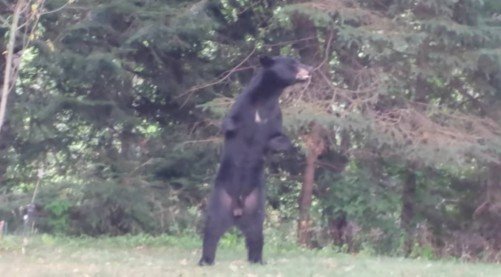