Solar Impulse 2 Completes Round the World Flight on Zero Fuel

The first round-the-world journey by air and without fuel by Solar Impulse 2 succeeded this week by touching down in Abu Dhabi.

But while the feat was celebrated and heralded as an achievement for clean energy, it did not come without more than a few setbacks. What took more than 16 months to complete was only supposed to take five.

Initial issues with the plane’s solar-powered battery system forced a grounding halfway through the trip, bad weather and an illness by the plane’s captain and project leader Bertrand Piccard also delayed the final leg.

Although postponed, it was still a momentous achievement for the group that had worked so hard to make their vision reality.

Having already broken a world record for longest solar flight across the Pacific Ocean, Picard praised the team and the symbolism of what they accomplished upon landing on the final leg. 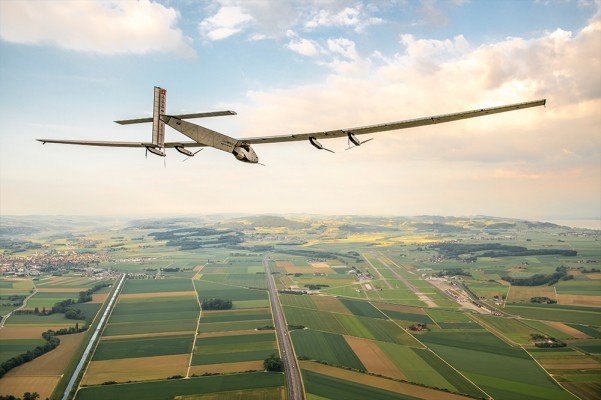 The plane itself has a wingspan the size of a 747 aircraft but the weight no heavier than a car. It’s driven by four engines, fueled by 17,000 solar cells embedded in the wings. The plane travels around 50 mph and can easily be blown around in bad weather.

In addition to the engineers, the voyage was no small challenge for the pilots,who endured temperature changes from -4 to 95 degrees Fahrenheit, using oxygen tanks and combating severe turbulence. The 48-hour final leg from Cairo, flying over the Red Sea and the Saudi Desert, was no walk in the park either.

“It’s been two hours now I’m flying into high up and down drafts. And I can’t even drink. It’s really exhausting,” he tweeted on Sunday.

After reaching the ground for the final time, Piccard spoke with a huge sense of relief and pride.

“It was a project that was very difficult, a lot of people doubted we could do it, so of course for the team it’s fantastic but also for all the people who believe in clean technologies,” he told reporters.

On whether the plane is in fact emission free, no fuel was used during the flight, but detractors point to the use of carbon fuels to construct the plane and build the solar panels and batteries. I guess some things just aren’t perfect.

For more on the plane and the voyage visit SolarImpulse.com