There is good reason Larry Weishuhn is known as the legendary Mr. Whitetail. Besides being a prolific hunter, Weishuhn is a world-renowned wildlife biologist, award-winning outdoor writer and television personality.

What Weishuhn has learned over the years, much of which was passed down to him through family and friends, has been conveyed to others in the form of magazine articles — the first of which he wrote in 1970 — research papers, television shows and books. Put together Weishuhn’s impact on the hunting world has been immense. There are few people who have introduced hunting to more participants than Mr. Whitetail.

His latest show, Dallas Safari Club’s Trailing the Hunter’s Moon, on the Sportsman Channel, is in many ways a culmination of all the work he has accomplished, a show that tries to approach things a little differently. His top priority, he said, is to be entertaining. The second is to educate. And for good reason because his knowledge is vast.

“It’s like that old adage, you can catch a lot more flies with molasses then you can with vinegar,” he told LiveOutdoors with a chuckle. “We try to teach people things, have them relearn things in some instances that maybe they’ve forgotten. But at the same time try and convey a great message as far as conservation

We spoke with Weishuhn from the road somewhere in Texas as he was returning from a recent hunting trip. Chances are any given day Weishuhn is either hunting, on the way to a hunt or returning from a hunt as he is travelling nearly 300 days per year. When we asked him what has changed among hunting these days, he said three things: camouflage, technology and habitat.

“We probably live in the golden age of whitetail deer,” he told LiveOutdoors. “We have so many whitetail deer and they have extended their range in many different places.”

By controlling parasites like screw worm,  paying more attention to habitat and just good luck in terms of climate conditions, whitetail deer populations in the United States have generally been increasing over the past century coming off extreme lows in the 1930s. Today there are more than 30 million whitetail deer, up from just 300,000 in 1930, according to estimates by the US Fish and Wildlife Service.

It comes to the habitat and everything starts with the soil. As we’ve become more of an urban population we’ve lost that connection to the soil and the land.

When it comes to camouflage, Weishuhn has a good sense of humor about the subject. As a devout hunter and student for many years, Weishuhn has studied the research on how animals see and so far nobody can tell what colors are actually visible to four-legged creatures, he said. So in essence it really doesn’t matter whether you choose Realtree or Mossy Oak.

“From the research as far as can be told, looking at the rods and the cones within an animal’s eyes, the best camo out there is green and black and red and black plaid,” he said. “But it’s created a tremendous industry, and camo these days is as much part of the soul of a hunter as it is practical for hunting. So I think anything that works there is good for hunting because it’s brought a lot more people into it.” 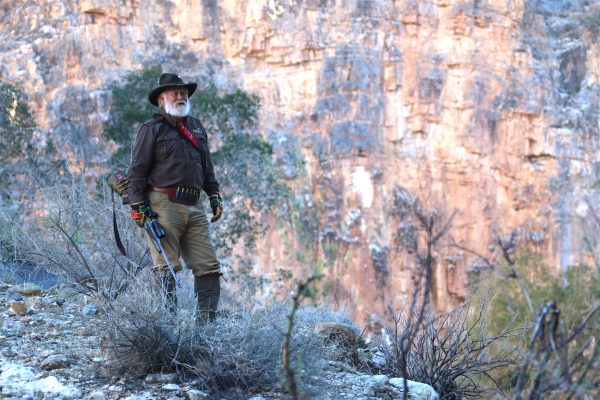 Weishuhn has a way of getting to the bottom of a lot of traditional mysteries in hunting. Take the “hunter’s moon” for example. For eons, the first full moon in November has been viewed as an ideal time to hunt because the animals are most likely to be moving. But why that is, and whether it was actually true has been debated by hunters.

One day, Larry and his hunting buddies were sitting around the campfire discussing the hunter’s moon theory and decided to put it to the test. For the next year they would document when they saw animals and the date. They recorded their findings on spreadsheets before the days of computers and laid them down on transparencies over moon charts. Sure enough, the figures lined up and Weishuhn published their findings.

For this veteran deer hunter, it still doesn’t make a difference whether he’s hunting in his own backyard or half way around the world. It’s the essence of the hunt, the natural surroundings and his fellow hunters that truly make a great adventure, he said.

“To me hunting is a total package, it’s matching wits with an animal and a habitat, trying to best that animal in an area where this animal lives,” said. “Then also it’s a constant learning experience. I look at the vegetation and the terrain and the geology of it. I spend time with guys who know a lot more about the area than I do and in some cases spend time with old friends and family. Then it’s of course being able to eat the animal that you take. To met that’s what I look for in every hunt and it doesn’t make a darn difference whether it’s a place I’ve never been to or one I’ve been to again and again. It’s a complete package.”

Featured photo: Weishuhn with a whitetail deer he shot recently in the Sandstone Mountain Ranch, near Llano, Texas (the little town long known as “The Deer Capital of Texas.”)

Insert photo: Weishuhn on a hunt in the mountains of Naukluft-Namib Desert in Namibia.