Adventures in the Clouds 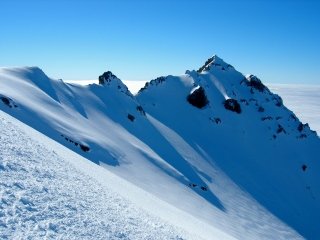 Enthusiasm for the outdoors can be as varied and as far-reaching as nature itself. Because of the way our society has evolved, most outdoors enthusiasts have been reduced to weekend warriors, and although there are countless adventures to be had on Saturday and Sunday (and the rarer but always spectacular three-day weekends), there are some things that simply cannot be done in a couple days, and our minds should never be turned off to those, despite how many emails we need to return and how many presentations we need to plan for.

One of the most spectacular (and yet surprisingly accessible) adventures to be had is high-altitude mountaineering. Yes, it sounds intimidating, and when you look at photographs of people wrapped up in winter gear, clutching ropes and ice axes and digging their crampons into a steep, icy slope, it can sometimes go beyond intimidating and become something to be feared. But that challenge is what adventure is all about.

My first experiences with mountaineering were not at high altitude, but were instead in a place where the elevation was low but the weather and the conditions rivaled some of the highest ranges in the world: New Hampshire’s White Mountains. Every region of the country has mountains like the Whites. They’re small and can be conquered in one or two days, but they’re the best training grounds for bigger challenges. Every one of these, without fail, has some sort of climbing school that offers very quick and very inexpensive courses in basic skills like how to walk with crampons, how to self-arrest, avalanche safety, and how to treat hypothermia and frostbite. Any guided trip up a mountain will be supervised by professionals who know all this like the back of their hands, but it’s good to know it for yourself too, because there’s always that chance that it might be them who needs saving. Climbing a mountain in the winter is a lot like skiing, except without the chairlifts and without the quick trip down (although some climbers do carry skis).

After years of climbing in the White Mountains, I had a couple chances to try my hand at high altitude. I climbed a few peaks in New Zealand that didn’t go much higher than 10,000 feet, and around the same time climbed Tanzania’s Mt. Kilimanjaro, at 19,340 feet the highest point in Africa and the highest free-standing mountain in the world. Despite all the gear and all the additional safety precautions and know-how that’s involved, climbing at high altitude oftentimes is not all that dissimilar from a weekend hike, with just a few major differences. The first, of course, is the cold, and the second is the lack of oxygen, which takes a little more getting used to. Kilimanjaro and even Everest can be climbed in just a couple days, but it’s because of the lack of oxygen that it takes weeks and sometimes months, because your body must be given time to acclimatize, otherwise you risk all kinds of terrible ailments. At high altitude, everything is harder. Something that’s easy at sea level, like packing a sleeping bag, leave you completely winded at altitude. But there is a benefit to these extended stays on the mountains. It forces us to take it slowly and enjoy ourselves.

But it’s all worth it, for the views, the accomplishment, and the adventure. And the best part is, you don’t have to go to New Zealand or Africa to experience it. There are amazing opportunities for high altitude climbing all over the world, including here in the US and in nearby Canada. Colorado and California have the Rockies, Mt. Whitney, and others. There’s Mt. Rainier in Washington, and, if you’re really adventurous, Denali in Alaska. These are amazing adventurers that go far above and beyond the weekend warrior level.

But you might need to put off those emails for a couple days.