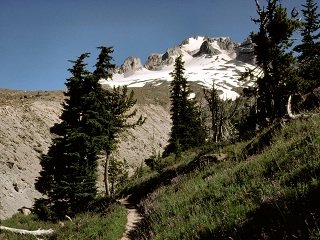 For many, the Pacific Northwest is the pinnacle of all things outdoors. With massive forests, majestic mountain ranges, and coastal views that anglers, hunters, and campers alike can enjoy, it’s no secret why the region has such a warm place in the hearts of outdoorsmen. Hikers enjoy the region because of its impressive collection of scenic, remote, and challenging trails that offer great exercise, as well as pristine views of some of the area’s most spectacular landscape. One such trail is located within Oregon’s Mt. Hood National Forest, and is the subject of this month’s Trailheadin’, the Timberline Trail.

The Timberline Trail is one of the best hikes that the forest has to offer. It offers ambitious hikers great views of not only Mt. Hood, but also the volcanoes and even Portland itself. You’ll find the trailhead at the Timberline Lodge and from there it loops around the landscape in a 40-mile circle, and reaches elevations of over 7000 feet. Most people begin at the lodge and embark, clockwise, often taking around 4 days and 3 nights to complete the loop. The trail is backpacker friendly, but it is on the difficult side, as far as trails are concerned.

To detail each of the Timberline Trail’s points of interest would be nearly as arduous of an endeavor as embarking along the trail itself, though I will highlight a few of the more popular sights the trail has to offer. After initially leaving the lodge and heading up the trail, you’ll pass beneath chairlifts and descend through a series of meadows, during which you’ll have spectacular views of Mt. Hood, as well as the Three Sisters and Mt. Jefferson.

A little over a mile into the trail, hikers are rewarded with an immersion into Little Zigzag Canyon and then into a forest. Here, you’ll find a campsite that offers no water. Eventually, hikers reach the Zigzag Overlook, which offers views of the meadows known as Paradise Park. This early introduction to the rugged majesty that the area has to offer is just the tip of the iceberg that is the Timberline Trail.

Seasoned Timberline Trail hikers know that summer and fall are the best seasons to tackle the famous trail. Winter conceals trail markers and makes navigating the already trying path exceedingly more difficult. Furthermore, the early months of spring are riddled with snow melts, which can flood rivers and add further hardships on the trail.

If the Pacific Northwest is where your next hiking or camping aspirations lie, then the Timberline Trail is a great place to start. This trail makes for a nice long weekend and provides newcomers with an accurate portrayal of the hikes within the region. The national forest is home to numerous other trails—some longer, some shorter—and a true outdoorsmen would relish the opportunity to try each one out.