Falling From the Sky (the safe way) 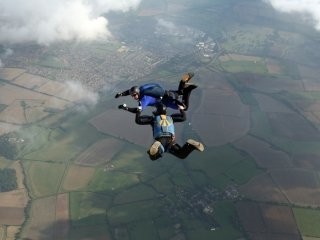 Everything about skydiving seems backwards.

The list goes on. It’s one of those things in life that there are so many reasons — and good reasons, at that — to not do it. And yet, being the curious, thrill-seeking creatures we are, we’re drawn to the danger, to looking over the edge and being yanked back at the very last second. The biggest risk of all, it still seems, is not taking one.

The weather needs to be perfect. There can’t be too many clouds and there can’t be too much wind. And rain and other inclement elements, of course, would make the experience most unpleasant (obviously, lightning is a no-no). Depending on where you are in the world, your jump will probably be rescheduled once or twice. It might frustrate you, because there might be times when you drive all the way to the airfield only to find that the weather is turning or the wind is picking up, but don’t let it. The idea is not only to maximize safety, but also to maximize the experience.

Once your day comes, they’ll tell you to wear jeans and closed-toe shoes, and you’ll wait a little while as other groups who are ahead of you in line head out for their jumps. It’s rather disconcerting at first to see a group of people leave and then have only the pilot return, but they all come back sooner or later. You might catch a glimpse of one or two of the videos that jumpers can pay extra for. It’ll give you a taste of what awaits you.

When your turn arrives, the instructors give you about a thirty-second rundown of how everything will work. In all likelihood, they’ll be twentysomethings with all kinds of fancy gear. Maybe they’ll have long hair and use words like “gnarly.” In any case, you’ll be surprised at how little instruction they give you. They’ll tell you to keep your arms by your sides and your legs stiff at first, and when they tap you on the shoulder, it’ll be okay to spread ‘em as you wish. They’ll give you an idea of what to expect, they’ll show you how to release the emergency chute, and they’ll strap on your full-body harness. Before you know it, you’ll be walking across the tarmac to a small airplane, and you’ll be taking off, thinking to yourself how strange it is that you won’t be inside when it lands.

The plane will reach altitude, will circle once or twice, and after a few more agonizing minutes, your instructor will hook their harness to yours, slide open the door, and instruct you to move toward the edge and put your foot on the landing gear. When you nod that you’re ready, they’ll thrust themselves — and you — into the abyss.

I wish there were a more interesting way to describe it, but in all honestly, the freefall feels exactly the way you’d expect, in every way. Close your eyes and imagine jumping from an airplane, and falling through the sky, perhaps as you would in a nightmare. That’s how it feels. But it isn’t frightening like a nightmare. You don’t have time to be afraid. You don’t have time to think. Later, you won’t even know what you were doing or what you were thinking about. You’ll watch your jump video (which they sometimes shoot even if you don’t pay for it in advance, so they can dangle it in front of your face later) and you’ll have no memory of screaming the way you did or smiling as wide as you did. You’ll laugh at the sight of your cheeks flapping in the wind.

When your instructor releases the chute, you slow down so quickly that it actually feels like you’re being yanked back up into the sky. It’s really quite hard to believe how fast you’re going, and since there’s no point of reference other than the ground and the aircraft above you, it sort of feels like you’re just floating in space. When the chute is pulled, though, the sensation changes completely, and to me, this part was most surprising. The world goes from windy, deafening, and fast, to complete stillness, and… silence. You’re suddenly drifting thousands of feet above the ground in complete silence. We’re so used to loud noises when we’re in the air. Whether it be the hum of an airplane or helicopter motor, or even a boat if we’re parasailing, but being up there in such quiet is a completely shocking sensation. At least it was for me.

Your instructor might give you the handles of the parachute and let you “fly” a little bit. They’ll show you how to turn, maybe they’ll spin you around, allowing you to feel some mild g-forces. When the ground nears, they’ll yank down on the handles and tell you to lift your feet, and you’ll land, gently and softly, and you’ll realize your heart’s been pounding a thousand miles per hour, but you didn’t even notice. You’ll go home and tell your family and friends about what you did, and they’ll either think you’re completely insane, or they’ll be insanely envious.

If skydiving is one of those things you’ve always wanted to do, there’s no better time than now to do it. This is one leap of faith that’ll turn your life around, and that’s the best kind of backwards anyone could ask for.