An Introduction to Scuba Diving 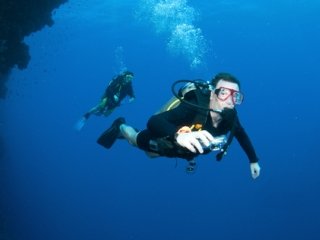 When many of us think of scuba diving, we think of laying on the beach at a tropical resort, sipping margaritas, when all of a sudden a group of people in black wetsuits with lots of equipment hanging off their bodies walks by, wades into the ocean and boards a small boat, and disappears down the coast. It’s easy to think of these people as insane. Why would anyone abandon this relaxing paradise and willingly go do all that… work?

Make no mistake. Diving is a lot of work, and it takes a lot of training. The rewards, however, are unimaginable.

If you’re the tropical destination type, most hotels and resorts will offer a basic diving course, which consists of a little classroom time, a little pool time, and finally, an open water dive. If you want to go the extra mile or two, you can earn your PADI or SSI certification, and you can dive anywhere in the world without having to go through the motions again. If you get really into it, there are lots of advanced certifications you can work towards, such as underwater photography.

In addition to resort destinations, you can find dive shops just about wherever there’s ocean, from Los Angeles to New York City, from Texas to Seattle. Diving enthusiasts, however, would scoff at most of these locations. The clearest water and the best reefs, they’ll say, is in the tropics.

The training will teach mostly how to use the equipment and how to move and communicate underwater. Diving is dangerous, and since you’re isolated with your own gear (the first two letters in scuba literally stand for “self-contained”), you need to know the in’s and out’s of everything that’s strapped to you, and in order to move underwater, you need to understand the physics of things like pressure and neutral bouyancy. You need to know how to do things like remove your mask completely and empty the water from it after putting it back on, all while underwater (yes, it’s possible). There’s an entire language of gestures (something akin to a “mini-ASL”) which you need to memorize. For me, the hardest part of diving is what’s called equalizing, in which you hold your nose and attempt to relieve the very painful pressure in your ears as you descend.

Once you’re through the training and have touched the bottom for the first time, you are truly transported into another universe. You drift and float as if you’re in outer space, and you explore a world that defies everything you’ve ever experienced in nature over the course of your entire life. If it sounds wonderfully epic and mind-numbing, that’s because it is.

Next time you’re lounging at your resort, and you see those people with all their equipment walk by, don’t think of them as crazy, but rather, think of all the amazing things they’re about see and experience. And put down your margherita and get in line for the next boat out to sea.