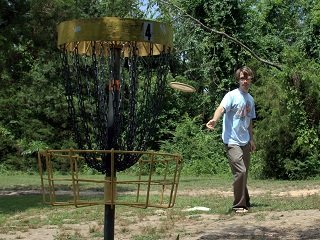 There are several ways to enjoy the outdoors. Some people are more inclined to excel at one activity, while others take it upon themselves to learn a variety of activities. I fall within the latter category, and try to participate in as much as I can when it comes to outdoor interests. Disc golf is a sport that I’ve been playing for over ten years for a lot of reasons. It gets me outside, is great exercise, and it’s so much fun. There are many who’ve never heard of the sport, though, so today I’ve provided you all with a breakdown of the basics of disc golf.

Disc golf is quite similar to regular golf in many ways. There’s a tee, a fairway, and a hole (basket), but instead of clubs, you throw specialized golf discs that vary in shape and weight, depending on their function. Each hole has a par and the object is to sink the disc in the basket at or below par. Pretty straightforward, right?

Just like a set of golf clubs, discs come in many forms: putter, approach, mid-range, fairway, and distance drivers. Each one is ideal for a particular situation or distance and whichever one you throw in a given spot will depend on your own personal style, as well as wind and course design. I’ve seen people do just fine with only a driver and I’ve also seen people with huge bags filled with over a dozen discs for any given situation. Really, developing a technique and familiarity with each disc in your possession is the key. If you can do that through time and practices, you’re golden.

When it comes to throwing, there are several different styles utilized today, especially when driving off the tee. I personally implement a backhand throw, but there’s also a forehand style, an overhand style (known as the “Tomahawk”), and the roll, to name a few. If you’ve never thrown a disc before, I suggest practicing with a few different techniques in a field to find your throw.

Several companies offer quality products for disc golf. Discraft, Innova, and Millenium are brand I’ve owned and thrown throughout my years playing. Also, the plastic used to make the discs can vary in quality. For example, the translucent, candy-colored plastic used in Discraft’s Elite Z and Innova’s Champion series is one of the highest qualities found on the market and anyone who’s thrown one will attest to that. Such discs are more expensive than the standard $10-$15 price range, though, and can cost around $25 for a single disc. Other than discs, you can purchase portable baskets on which to practice in your own yard or a nearby park. Also, if you become interested in the sport, I highly suggest picking up a disc bag to carry your inevitably growing disc collection. Bags are available in several styles and sizes, and most are equipped with adjustable shoulder straps, compartments and bottle holders.

Disc golf is one of those sports that not many are aware of, but once they discover it, they’re hooked. There are courses everywhere in the United States and discs can be purchased at nearly any sporting goods retailer. In fact, most stores carry three-disc starter sets that include a putter, mid-range, and driver. If you’ve ever been curious about disc golf and are thinking of checking it out, I promise you won’t be disappointed. I will warn you, though; be prepared to spend some money once you try it out because I know you’ll want to keep playing!

SHARE
TWEET
How To
previous articleBass Fishing in the Heat
next articleHave You Ever Been Watched?
Overture-undertone navbar fix
Monitoring string
monitoring_string = "68ec033d54c4f3b1ca4aca7f4c1e01ca"
a