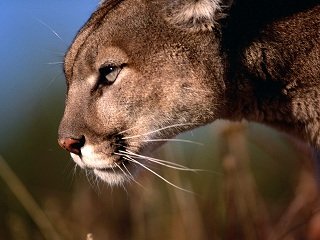 It can be easy to get so caught up in the beauty and serenity of the outdoors that we forget that nature can also become serious in a heartbeat. Carelessness, neglect, and being unprepared can lead to dangerous situations and it helps to learn how to handle each potential emergency should it ever arise. One thing people often overlook is that human beings aren’t the only things walking around in the woods. Mountain lions are just one of the predators that call the outdoors their home and attacks on humans have been recorded, though they are rare. Below, you’ll find some tips to prepare you should you ever encounter a mountain lion on the trail.

As I’ve said, cougar attacks on people are rare, but they do happen. These cats are active during the night and actively stalk prey, so if you’re hiking in an area where deer or other potential cougar prey items are prevalent, be alert. If you can, try to contact the local DNR to get a better idea of where cougars have been spotted in the area. Since cougars tend to pounce and take their prey by surprise, most attacks occur in rocky or heavily bushy areas, where the cats can remain hidden.

If you stumble across a mountain lion while you’re hiking, it can be hard to really assess the situation. However, if it’s hissing, crouched, or flattening its ears, these are the warning signs of a potential pounce. Cougars, like any animal, are dangerous and unpredictable when cornered, so if this is the case, slowly back away to allow the cat room for escape, as that is most likely all it cares about. Also, be sure not to make any sudden movements or try to run, as this can trigger a cougar’s instincts and cause it to strike. Sometimes, it also helps to be intimidating. If you can without turning your back or making yourself smaller, throw rocks or sticks and make yourself as large and loud as possible.

In the worst-case scenario, a cougar will attack. Should this happen, use whatever you have to defend yourself. Sticks, rocks, a knife—they can all be used to fight a cougar. If you can, target the cat’s eyes and nose and whatever you do, don’t give up. Be as loud as you can while fighting the cat, as well, since you never know who may be within earshot to help.

I pray no one is ever attacked by a cougar, but if it does happen, the tips listed above will better prepare hikers. Cougars don’t see people as food and attacks are really the result of our intrusion into their homes due to a dwindling habitat. We would act in the same way if someone broke into our house, and defend ourselves and our families tooth and nail. Be respectful and give such animals as much space as possible when you encounter them and you shouldn’t have any problems.