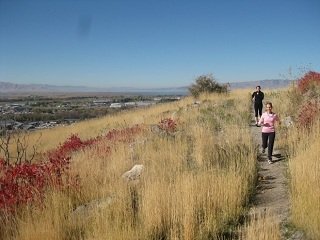 Not every trail in the United States is a singular, stand-alone loop that winds its way through a segment of countryside and then ends at the same parking lot where it began. While there’s nothing wrong with trails like this, there are also trails that span across entire states, or even the country, that consist of several portions. Today’s Trailhead finds us at such a trail—the Bonnville Shoreline trail—that spans along the would-be shoreline of the former Lake Bonneville, in Utah.

The Bonneville Shoreline trail is actually a dozen smaller trails that stretch along the Wasatch Mountains and span just over 100 miles and connect Logan in the north and Provo in the south. There are plans, however, to expand the trail to 280 miles in the future, stretching it to the Idaho border all the way to Nephi. The trail passes along several towns, including Salt Lake City and Ogden, so there are numerous access points to the trail, as well as ample opportunities to take in the scenery as the trails rises and falls throughout the region.

Each section of the trail offers its own beauty and appeal to locals. The Salt Lake City section, for example, extends from City Creek Canyon to Emigration Canyon and there is a 10-mile loop that has grown to be a favorite among cyclists. The Draper section to the south is nearly 5 miles elevates around 200 feet, but has roughly 600 feet of climbing incline, which offers more of a workout.

If you’re the competitive type, or simply enjoy training and achieving a personal goal, several annual races spend some time on the Bonneville, including the Gib Wallace 10K Memorial, the Fully NUTS Half Marathon, and the Wasatch Front 100 marathon.

As beautiful and scenic as it is, the Bonneville Shoreline is actually a trail created and maintained by citizens. Being as such, there are portions of it that are more rugged than some may be used to, so newcomers should be aware of sign postings.

Anyone who has ever spent some time in Utah can attest to the rugged beauty of the state’s landscape and tranquil privacy that the land has to offer to those willing to put in a little work. The sloping crests of the Wasatch Mountains, along the long since dried shores of Lake Bonneville, offer miles upon miles of serene trails for runner and cyclists alike. Anyone visiting Utah will find the Bonneville to be one of the nation’s best trails. Citizens of Utah have spent years establishing and maintaining the trail and their love for the region is evident in the plans for future additions to the trail.