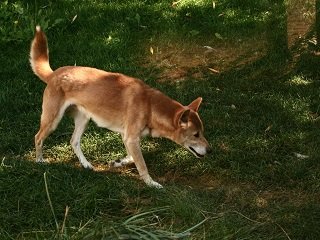 When we think of dogs, we tend to think of our friendly, loving pets who wag their tails excitedly whenever they see us, or who always seem to know when we need a lick or a nuzzle. There are times, however, when man’s best friend behaves to the contrary, such as when you encounter a lone canine on the trail, perhaps. Stumbling across a lone, aggressive dog can happen and today we’ll take a look at what you should do in this situation.

If you encounter an excited or aggressive dog on the trail, don't play around with it. Instead, stop where you are, as safely as possible, and get off your bike while keeping it between you and the dog. Do not try to approach the dog or harm it. Rather, use loud noises, shouting things such as "Go home!" or "No!" and point down the way from which the dog came. It's important to establish that you are the alpha and that you will not tolerate aggressive behavior. Nine times out ten, this will at least stop the dog and it may even send it scooting back home. Nevertheless, if you continue walking forward and use loud noises, in most cases, the dog will start to behave.

If a dog does attack, which is a rare occurrence, pepper spray will usually do the trick. If you don't have spray, a stick or rock can be a good defense. Target the dog’s face or eyes and yell for help. While I don’t usually like to encourage harming a dog, your life or the lives of those with you are important, especially if small children are involved.

If you do get bitten, do what you can to treat the bite wound and immediately get to a hospital. To be safe, always get a series of rabies shots if you’re bitten. Like dehydration, when rabies symptoms start to appear, it’s already too late.

It isn’t typical for dogs to behave with aggression. Dogs behaving in such a manner do so because they’re either rabid or simply defending territory. Loud noises will usually do the trick, but dogs can still attack when they feel threatened. Always be cautious if you encounter an aggressive dog, and if you are attacked, seek medical help immediately. Often it’s the owner’s carelessness, or worse, their abusive training of the animal, that lead to such encounters. It’s important to remember that the dog wasn’t bad or mean; it was simply doing either what it was trained to do, or what its instincts as a canine urge it to do.