Is There a Bigfoot at Lake Tahoe? 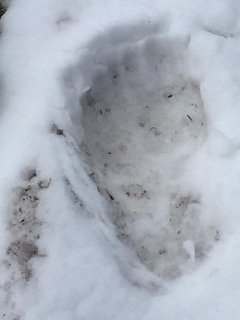 I remember the day like it was yesterday, walking with my dad as we came across the biggest foot prints either of us had ever seen. They were real. We knew it. And that was the only time I ever remember my father being scared. I felt exactly what he felt.

An 11 year old never forgets stuff like that. And, as a life-long hunter and outdoorsman, I can recall many strange incidents that made me sit back and consider the possibility of such a creature existing. As a tracker and survival expert, I naturally have my “feelers” out at all times when I’m in the woods, which makes the alleged bigfoot tracks I recently discovered even that more intriguing.

I was teaching a class on wilderness skills to fifth graders in Lake Tahoe last Friday and happened to be talking to a parent during a break. I must have mentioned my tracking experience because the next thing I knew I was staring in awe at four pictures I couldn’t identify. 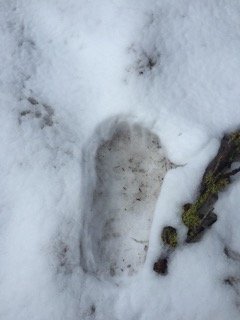 After carefully examining them and running through a series of questions that would probably qualify me as either a lunatic or a bonafide Sasquatch investigator, I concluded that they are, in fact, beyond the scope of my understanding and knowledge. Here’s some interesting facts:

The woman who captured these pictures was in a remote area surrounding one of the thickest wooded areas on the west shore of Tahoe. If I wanted to hide and never be found, this is where I’d go. The tracks she photographed crossed the trail she was on and continued down a steep hill, into some very thick, dark woods. Why wouldn’t this be a perfect home for Bigfoot?

Although I cannot entirely rule out black bear, there are some oddities that I cannot seem to explain. First, black bears will direct register (place rear feet into front tracks) on occasion, to conserve energy in the snow, but I see no clear indication of a track within a track. These clearly appear to be one track. Otherwise, typical black bear tracks show all four prints and are much closer together. Although there is no scale to go by, the witness said that the gait (length between tracks) was at least seven feet. And, the size of each track was estimated by her to be about 16 inches long.

If I were to do a Bigfoot hoax, I wouldn’t go to a remote area where few people are, especially during foul weather. It makes no sense. Second, the direction the tracks went led into an incredibly steep drainage where it would be very difficult to come back out of. And, once again, the weather was a mix of rain and snow. Why would someone go to this length knowing that the tracks would be either covered in snow, or melted away by rain, and the odds that someone would see them are remote at best. Why not do it in a popular, well-traveled spot?

I have looked over these pictures many times and I can’t seem to conclude either way whether they are authentic or circumstantial due to variables including weather and temperature. They appear to be very fresh, even showing dirt imprinted in the tracks. Although black bears also have five toes that appear in their tracks, the one’s pictured are missing the typical claw marks often seen with black bear prints. They appear to be shaped like a barefooted human print, with clear views of the arch, ball of foot and heal area. The picture showing the gait (two tracks walking) indicates sort of a duck-type stride. A bear walking next to those tracks would probably show four prints grouped together instead of, what appears to be one, two legged creature, walking along. I am almost certain that a four legged creature couldn’t make tracks like these. I see no indication of the other two feet and that leaves me baffled. These pictures were sent to scientific experts for analysis . . . stay tuned!

SHARE
TWEET
Critter Corner, Hiking, Tracking
previous articleLost Campers Found Just 2 Miles Away
next articleTop 4 UTVs for Getting to Your Next Hunt