Lake Tahoe Ironman Proves Why It’s One of the Toughest

The conditions could not have been better this weekend as the 2015 Lake Tahoe Ironman competition got underway.

Considering that the contract is only good for seven years, many wondered if the event was somehow cursed. But as the sun lit up the quiet little community of Kings Beach (my hometown), a few hundred green and orange swim caps churned the glassy emerald green waters of Lake Tahoe as the 2.4 mile swim got underway.

Less than an hour later, two of the leaders – and the two men that would finish first and second overall – emerged from the frigid water and headed up the beach to get ready for the bike event. 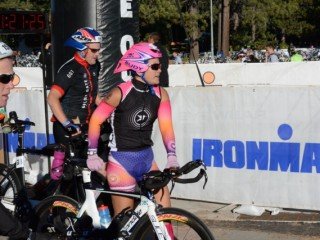 The sun had risen and the temperature was perfect as the cyclists departed on their 112 mile bike ride that took them along the north shore of the lake, through Tahoe City and then to Truckee where they would head back to Kings Beach over the 7,200 foot Brockway summit.

With over 6,000 feet of climbing, some rate the Lake Tahoe Ironman event the toughest in the world.After finishing the 2 1/3 loop biking event, the athletes end up at Squaw Valley, the sight of the 1960 Olympics, where they then have to run a full 26.2 mile marathon.

About 11 hours after they jumped into the frigid lake that morning, they will stagger across the finish line back at Squaw Valley. As I watched them cross the finish line, emotions were high. One lady I talked with couldn’t hold back the tears as she explained how elated she was to even finish the event. Many other athletes collapsed as soon as they crossed the finish line.

At the end of the day, it was a nearly perfect Ironman event. The weather couldn’t have been better and there was no wind whatsoever.

Gregory Lindquist of Boulder Colorado had the best overall time of 09:39:23 and the second place finisher Ryan Linden was right behind him finishing 09:39:52. Third place finisher came in about 4 minutes later and it seemed like the rest of the leaders were spread out about three minutes apart. Sonja Wieck from the USA was the women’s winner, crossing the finish line at 10:28:55. My brother, and Lake Tahoe local, did amazingly well with a time of 11:28:05, finishing 125th overall.

The hum of people and helicopters is gone now, and the little community of Kings Beach has returned to normal. The event that many thought would never happen went off without a hitch, and there are many exhausted athletes returning to wherever they are from along.

Meanwhile,50 lucky qualifiers will be looking forward to the 2016 World Ironman Championships in Kailua Kona Hawaii. I wonder if they’re already thinking of how hard they will need to train for the event. I think I’ll take a leisurely walk in the woods.