Stunning Destinations in the Land of Enchantment: New Mexico

It was once considered a vital part of the real Old West, populated by Native Americans, prospectors, cowboys and outlaws with sheriff’s hot on their trail.

New Mexico became the 47th state in 1912. Stunning natural beauty and enduring culture have helped it remain a popular destination for those with a passion for nature as there is splendor in this “land of enchantment.” 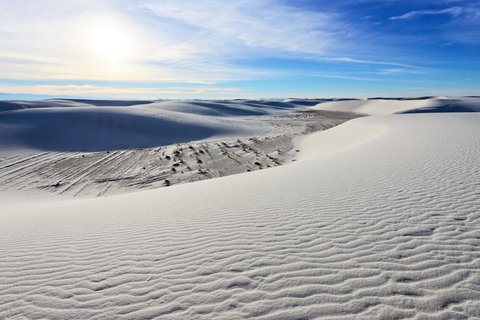 White Sands National Monument is part of a 275 square mile stretch of sand dunes and it’s like no other place on earth, rising from the heart of the Tularosa Basin as one of the world’s natural wonders. Great waves of gypsum sand have engulfed the desert creating the massive dune field.

Hiking in this ever-shifting sand is exhausting and disorienting, but unlike beach sand the sand here is made of eroded gypsum crystals that don’t get scorching hot in the sun and can normally be walked on barefoot even on the hottest days.

Sunsets and sunrises are magical against these white dunes. Plan to camp in the park or to join a ranger-led sunset hike. Sledding is a popular dune activity, and round saucer-type sleds work best on the powdery sand.

While the area may appear uninhabited, many species of animals have adapted to the conditions to make the dunes home. Expect to see road runners, bleached earless lizards, and kangaroo rats. Because there is virtually no fresh water within the dune fields, animals that live here get almost all of their water solely from the food they eat. The kangaroo rat eats only dry seeds and never drinks water. 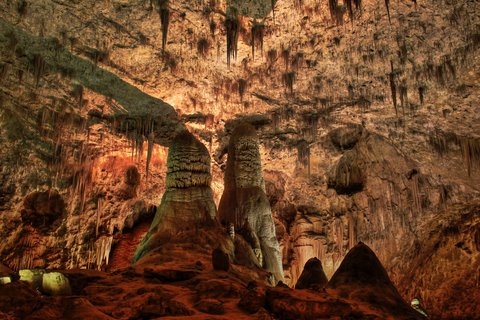 Beauty and wonder above and below ground. New Mexico is spectacular on the surface but at least one of the state’s natural treasures lies underground at Carlsbad Caverns National Park.

Located on the southern border with Texas, Carlsbad is worth the drive and boasts 119 mapped caves including the Big Room, a natural chamber 4000 feet long, 625 feet wide, and 225 feet high. That makes it the third largest cave chamber in North America and the seventh largest in the world.

High ancient sea ledges, deep rocky canyons, flowering cactus, and desert wildlife – these are the sights above ground in the Chihuahuan Desert, but hidden below the surface are those 119 caves formed when sulfuric acid dissolved the surrounding limestone, leaving behind the caverns.

The basic cavern entry is by way of two self-guided routes, revealing fascinating geological formations called speleothems. Most of the formations inside Carlsbad Caverns were active and growing during the last ice age, when instead of having a desert above the caves there were pine forests. But 250 million years ago, this area was actually covered by an inland sea. 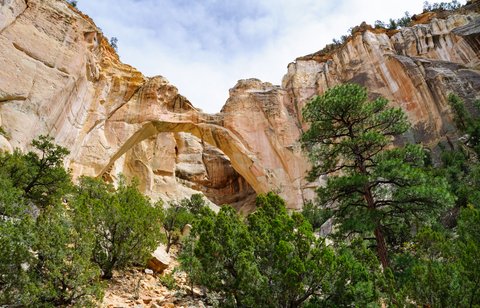 The primeval black basalt terrain of El Malpais National Monument was created by volcanic forces when molten lava spread out over the high desert from dozens of eruptions to create cinder cones, shield volcanoes, collapses, trenches, caves, and other eerie formations. This stark landscape preserves one of the best geologic records of volcano activity on the planet.

In El Malpais there are easy drives to scenic overlooks, short walks and strenuous hikes, caving and rugged backcountry to explore. Many trail routes are marked with cairns. Instead of a well-defined path clearly visible on the landscape, a series of rock piles are used to trace the route. This is common on lava landscapes where creating a traditional trail or footpath is impossible because of the extreme terrain. 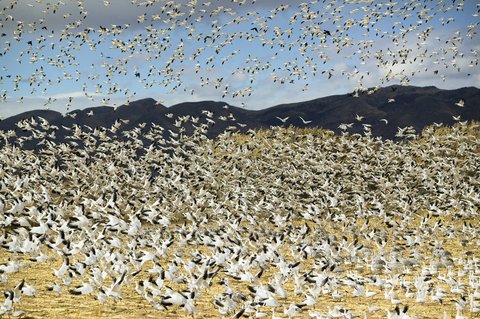 Drenched by an average of 300 days of sunshine a year, New Mexico is a winter paradise for migrating birds, and tens of thousands flock to the Bosque del Apache Wildlife Refuge just south of Socorro between November and May. More than 370 species of birds have been spotted there since the refuge was established in 1939. This is one of the most diverse bird-watching spots in North America. No camping is allowed within the refuge, but you can find sites in the nearby Cibola National Forest.