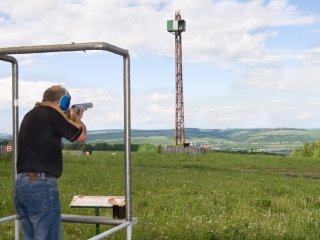 It’s no secret that the top shooters practice nearly all the time, so it should seem obvious that the best way to improve results is practice. It doesn’t seem that most shooters try all that hard to improve their results. Maybe we read an article here or get some instruction, usually as youngsters, and then just go on shooting occasionally. The key to being a great shot is to ALWAYS shoot. Great instruction is good too.

So what do I mean by shooting a lot? Let’s define it. Say if you want to be a great wing shot. If you aren’t already shooting competitively on some level, chances are this is the biggest single advancement you could make. Shooting competitively for fun or to seriously compete to win allows you both the level of shooting support and training as well as the volume of empty shells to make a BIG difference. How many shells? President of the Practical Shooting Association says “I shot 2,000 rounds a week back then, in between school and work, and on Sunday evenings we cast bullets,” referring to his upbringing in the shooting sports. Shooter after shooter agrees. Upwards of a thousand rounds a week at some point in your shooting career will make for drastic improvements in your shotgun, pistol and small bore success! The same principle scaled down somewhat applies to large bore shooting. Always shoot.

Seems like a lot of shooting? It is, and it isn’t necessary for everyone, just the top competitors. The principle remains the same for less ambitious goals such as killing birds consistently. What level is right for you, is well, up to you. Fifty or even a hundred rounds a week for even half a year will show good results if you usually shoot twice a year. The best hunting shots I have ever witnessed both have put in their 1000 plus round weeks, one of them at trap and the other at skeet. These are the guys that go one, two, three on good duck opportunities, and not only that, they tend to kill birds outright with far less cripples. They are also the guys that put together intentional doubles with some frequency. I have witnessed one friend shoot 3 out of 5 on crossing birds in sporting clays as a single shot double! The other two birds he cleaned with his second shot.

Shooting better isn’t just luck or being on one day. Shooting improvements are purposeful and can be made by anyone with the inclination to improve. Shoot more, seek good shooting advice, and then shoot more again. The results, and the fun, will follow.