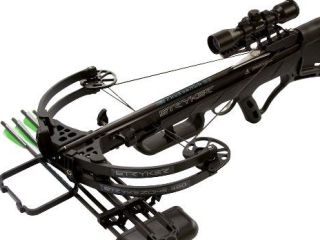 With the popularity of crossbows taking the hunting industry by storm, the manufacturing field is starting to become crowded.  For now, the Stryker Strykeszone 380 has risen to the top of the field, and it is worthy of your hunting consideration.

I am not a big stats guy, so you can look to the manufacturer for those, but I can attest to the quality and performance as I got to hold and shoot one last week.  One unique aspect of this crossbow is that it is considered a ‘compact’ model.  Unlike larger, full-size models, compacts are not known for meeting similar performance standards, but that is where the Strykezone 380 shines. It does shoot as well as most full-size models and it is more convenient since it is smaller in size and lighter in weight.

Stryker chose to go with a 15.5” power stroke. What this means to you is, it has a fast bolt. Generally, the lower the power stroke, the faster the action since the bolt has more time to be propelled; however, this is not gospel as some shorter actions have massive kinetic capabilities. But, this crossbow does qualify as super-fast, just not hyper-fast.

Another benefit to being compact is that it is easier to carry afield and it does not contain the standard sized problem of getting hung-up on brush.  This model is definitely designed for both treestands and stalking.

It maintains an average weight of just over eight pounds when set up, and it is relatively quiet. It measures at around 92.2 dba, which is slightly louder than a compound bow but quieter than most crossbows.

In my opinion, the best feature on this crossbow is its trigger. Unlike every gun and crossbow I have ever shot, this trigger is set light at a comfortable 2 pound 13 ounces. This means liquid smooth shooting and laser-like accuracy.  A nice, comfortable trigger is very under-rated.  Another thing I liked about this model was that it did not vibrate as bad as some crossbows do. I think Stryker balanced it out pretty well and that means that any possible target flinching should be eliminated.

Finally, a major positive for the Strykezone 380 is it’s priced well at around $750.00, but you can shop around online and find package deals that will save you money. I checked around and Cabela’s offers this model in a package deal that is hard to beat.