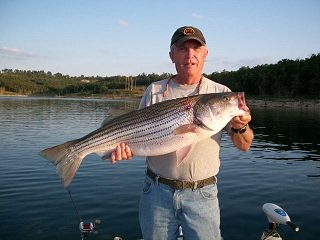 I think for this month’s Fish File, we’ll take a trip back to the salty coast and highlight a fish that seems to be one of most sought after species out there: the striped bass. America’s eastern coastline offers some great striper action, and anglers hoping to pull in a few linesides are a rare breed. Keep reading to learn more about striped bass and the tactics commonly used to catch them.

As their name implies, striped bass possess a series of dark stripes that run horizontally along their silver bodies. Like many species of saltwater gamefish, striped bass tend to grow large, often weighing between 30 and 40 pounds. The interesting thing about striped bass that sets them apart from many other saltwater species, however, is the fact that they are capable of surviving in both fresh and saltwater environments. In fact, they spawn in freshwater, and spend most of the rest of their lives in saltwater.

Since they’re migratory, stripers will move up and down the coastline, and even back out to sea during the year. However, the best time to fish for them near the coast is when the water drops to around 50 degrees, before they head out to deep water for the summer.

Fishing for striped bass can be a treacherous endeavor, depending on what technique you choose. Sometimes trolling is the way to go, while some prefer to surfcast using topwater lures to draw aggressive strikes, and then there are those anglers who will perch them precariously atop slick rock formations in the surf, often braving crashing waves that could knock them off like a golf ball from a tee, just to get their line out a little further. Artificial lures will work well for striped bass, whether you’re fishing from the beach or a jetty. Stripers will strike a variety of live bait, as well, including sandworms, mackerel, and shad.

When trolling for striped bass, it’s common to see boats running parallel to bridges. In order to keep your bait from snagging on pillars, tie on a three-way swivel and attach a heavy weight to one eye, your lure to the other, and your main line to the third.

When fishing jetties, be sure to keep safety at the top of your priority list. Wear appropriate footwear, in order to stay upright amidst slick terrain, and don’t carry a lot of gear if you need to nimbly negotiate small rocks and crevasses just to reach a spot.

Striped bass are a blast to get into and the fight alone makes them a species worth seeking out. In fact, the record striped bass took roughly an hour and a half to pull to shore! Just be sure that if you go the jetty route, to be safe and alert, since a wave can sweep you from your perch and into the rough water at any given moment. Bring heavy tackle, stock up on a mixture of lures and live bait, and hold on when one bites!