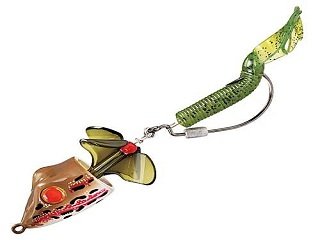 Even with the thousands of effective lures, rods, reels, and other tackle on the market today, there have been more than a few that have swung and missed, both on the water and with consumers. When it comes to fishing tackle, there is such thing as too much sometimes, and avid anglers can attest to that fact. Over the years, there have been several products that have left me—and I’m sure many others—scratching our heads in a mixture of confusion and disappointment. Today, I’ve taken the liberty of highlighting some of these ill-received products and the shortcomings that caused such a reception.

Fishing line is one of those products where it’s difficult to tell if it’s the line that’s bad, or just our luck on the water. Though, there are a few standouts that, upon taking one look at them, are destined to fail (looking at you, Cajun Redline). Braided, line, however, is a line type that seems as if it can’t ever fail, as long as it’s strong enough to get the job done. Well, Berkley’s Fireline Crystal is one braid that I honestly wouldn’t even call braid, as far as characteristics go. The Crystal line claims to be a “nearly invisible” braided line, but the bright, white coloration sticks out like a lightning bolt in the water, a common complaint among anglers who  have used this line in the past. Also, the line is not strong at all, and actually breaks quite easily, which is why I don’t even think of it as a braided line in the first place. Unless you’re catching croakers of ladyfish in crystal clear waters, I’d pick up a spool of Powerpro or Sufix instead.

A few years ago, Frabill, a well-known and much respected manufacturer in the fishing community, released a product that, in concept and innovation, was amazing and had a lot of promise. The execution of said product, however, had more than a few kinks and fell so short of what it should have been. I’m, of course, referring to the Hiber-Net. At first glance, the Hiber-Net is great. A net that collapses and stores within its own handle, freeing up a lot of space wherever it’s stored; who wouldn’t want that? Where the Hiber-Net fails is its ease of use. The netting often becomes snagged and refuses to collapse. Plus, the thing is just difficult to open and close. Once Frabill goes back to the drawing board and tweaks the design a bit, the Hiber-Net may end up becoming the only net you’ll need. Until then, hold on to the one you have.

I’ve saved the best for last, folks. Rounding out today’s coverage of “not quite there” products is a lure that has caused much laughter, furrowed brows, and even sadness over the years. If you’ve ever walked into a Bass Pro Shops and witnessed the horror that is the Turbo Toad, then you know of what I speak. I honestly can’t even begin to describe it in a manner that effectively captures its ridiculousness, which is where the picture comes from. I think this is one lure that tried to do way too much and just failed in its own, over-the-top, design. Mary Shelley’s, Frankenstein comes to mind every time I look at it, and with good reason.

There you have it. The aforementioned products are just a few of the many that have crashed and burned following their inception and introduction to consumers. Of course, I’m sure there are some who would disagree with my opinions, and that’s perfectly fine. I’ve used them all, listened to testimonials from other anglers, and have seen them collect dust on shelves over the course of a few years. If you don’t believe me, try them out for yourself. Don’t say I didn’t warn you, though.