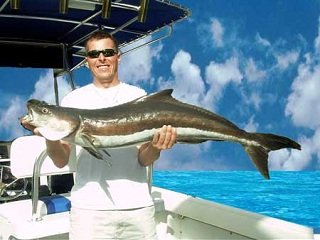 One of the best things about saltwater fishing is the variety of fish that call the ocean their home. This adds a lot of excitement inshore and offshore, because there are instances when you really never know what you’ll pull from the water. There are just numerous species that feed on the same prey and congregate together during feeding periods. One such species that can be found mingled in with the likes of redfish and others, is the cobia. Slender, agile, and voracious, cobia are highly prized fish that attract numerous anglers to the salty shores each year. What makes them tick, however? Where are they predominantly found? What tactics are effective when seeking them out? Keep reading to find answers to these questions and more.

With an appearance similar to salmon, cobia have been known to reach lengths of over six feet and weigh up to 150 pounds. They’re dark in color, with a pale white belly and white stripes that run horizontally and become more apparent during spawning. The unique thing about cobia is that their pectoral fins project outward, horizontally, which causes them to be commonly mistaken for sharks when seen from above.

Cobia tend to congregate around reefs, wrecks, and other structure, but will also actively pursue prey into shallow beach areas and mangroves when the need arises. They mainly feed on crab, squid, and smaller fish species, but have developed a pattern of following sharks and rays in an attempt to scavenge a meal. Furthermore, cobia are intensely curious, and will often approach boats willingly, even following hooked fish to the boat.

Spring is a popular time of year for cobia fishermen, as this is the season when cobia are roaming the beaches and are easy to spot. Live bait such as eels or small baitfish are popular baits for cobia, but artificial baits that mimic such prey work also. Cobia often follow rays into the shallows, so look for a few rays and you’ll shortly find cobia tagging along. Simply cast ahead of the ray and pull your bait back slowly in fronr of the cobia for a solid strike. A heavy casting rod is your best bet, as cobia tend to fight hard and for long periods of time. For this reason, I’d also advise not bringing the fish into the boat until it’s out of energy. Cobia are known for sudden, violent outbursts and have a reputation for not only breaking gear, but also bones, during their thrashing.

For many, fishing for cobia is more about following both the bait and other species that feed on the bait, for cobia will surely be there as well. There is nothing wrong with this, as a big part of fishing is adjusting and playing upon the habits of your target species. If you’re in the mood to hook into cobia this year, follow the bait, look to the shallows, bring heavy gear, and hold on tight.