Buzzing in the Moonlight 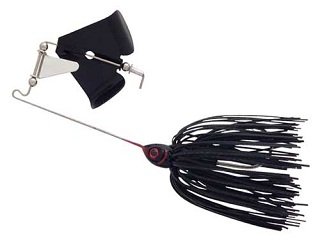 There are many anglers who will tell you that the best bass action occurs during the early morning hours, while others will swear by the late afternoon bite. While both times are great for catching bass, many overlook the excitement that night fishing brings to the table. Night fishing is all about making noise and buzzbaits are among the best lures to use to accomplish this goal. Below, you’ll find a few tips on how to take full advantage of buzzbaits during the twilight hours this season.

Night fishing requires a little different approach than fishing while the sun is out. For starters, since it’s so dark, fish won’t be able to distinguish between the subtle differences in color patterns like they do during the day. This is why you’ll need to make as much noise and churn up as much water as you can at night. Baits like poppers, jitterbugs, and buzzbaits are perfect. Fish can sense vibrations in the water through their lateral lines and baits that capitalize on this are your best friends at night.

Because visibility is so limited at night, black is the way to go when you throw a buzzbait. Fish will be looking up at the bait as it passes them, and the black color will silhouette against the sky very well and help it stand out. Furthermore, the bait’s wake will kick up a ton of water, which will help aggressive bass hone in on its location even better.

When throwing buzzbaits at night, it’s best to use a steady, slow retrieve while keeping the bait at the surface. Work them along the shore, across shallows, over weeds, and close to structure, and cast to those spots over and over. It takes a bit of time for bass to get up the aggression to strike, especially at night, so reworking an optimal spot is a good idea.

Any angler familiar with buzzbaits knows that several companies make great variations of the lure. I would check out the Buzz Blade from Booyah, right off the bat, as the lure possesses a built-in clacker that makes more noise than other buzzbaits. Strike King’s Kevin Van Dam Tournament series buzzbaits are another great option. Designed by KVD himself, these buzzbaits feature a keeled jighead that keeps the lure running true, durable skirts, and 24-karat gold plated blades that resist abrasion and offer more flash.

If you can get passed the bugs, night fishing brings with it some of the greatest action on the water. Topwater lures like buzzbaits are the way to go in these situations and the strikes you’ll entice from bass will show you why. Work them slowly and steadily and it won’t be long before you hear the explosion of an angry bass hitting the bait.