What Size Worm Do I Use? 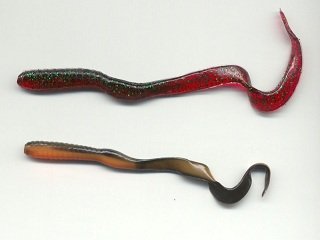 While many bass anglers have their own preferences and favorite lures for their local lakes, there are no doubts when it comes to the fact that there are staple lures and baits that any bass fisherman should have in their tackle box. One such lure is the plastic worm, which is one of the most versatile weapons in an angler’s arsenal, and comes in a plethora of shapes, colors, and sizes. However, with so many sizes from which to choose, how do you determine which one to throw? Well, there are a few factors to consider when deciding what size worm to tie on, and I’ve outlined a few of them for you today.

Water clarity has an impact on more than just what spinnerbait blade to go with, and when the water is stained or murky, a worm that falls within the 8 and 11-inch range is a good choice. This size also works great in heavy vegetation, such as grass or lily pads stems. Such a large worm is great when visibility is low, because the size is easier to see and also makes more noise, which will trigger more reaction strikes from fish. Most agree that and 8-inch worm is a versatile length and appeals to most fish. Plus, with an 8-inch worm, you can also shorten it when necessary, without losing much action. To determine how much length to trim, inspect the worm after a few strikes to see where the tooth marks from the bass lie along its body. This will give you an idea of where the fish are hitting the bait. If the strike marks fall behind the hook, simply trim a bit off the worm to adjust.

In clear water, or water that’s heavily fished, a smaller worm—around 6-inches—is a good option. This is because during peak times in the season, the fish in such a lake will be heavily fished, which means switching to a smaller worm will present them with a target they’re not used to seeing.

Anyone who’s fished for a while will tell you that big baits catch big fish, and the same is true when using worms. While sometimes switching to a smaller worm will trigger more strikes, more often than not, those strikes come from smaller fish, usually just around or below keeper length. Throwing a larger worm may not result in as many strikes, but any fish you do happen to entice will undoubtedly be good sized.

When it comes to worm size and which size is right for the situation, you’ll need to consider the types of cover you’ll be fishing, time of day, water clarity, and what type of bass you’ll be targeting. There’s a reason for the variety of worms on the market today, and any good angler will take advantage of this by being prepared for any fishing predicament and having several sizes in their tackle box. I wish I could give you a Golden Rule when it comes to worm size, but with so many external factors involved in fishing, nothing is ever certain, except, of course, that you should be prepared for this by arming yourself with a variety of sizes.