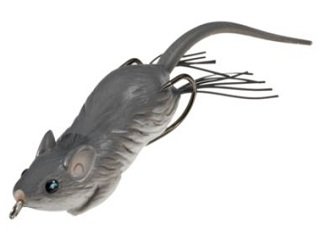 There are companies that you can predict to be successful or not just by looking at their first products. The LiveTarget series from Kopper’s has proven to be effective, reliable, well-made, and has helped make the company a favorite among anglers. From their crankbaits to their topwater frogs, Kopper’s has raised the bar, in terms of realistic appearance in baits. Recently, the company added to its repertoire by releasing a bait known as the Field Mouse. How does the LiveTarget Field Mouse compare to Kopper’s other baits? Find out below in this month’s Tackle Review.

The LiveTarget products are known for their realism, and the Field Mouse is no exception. This hollow-bodied bait is intricately sculpted to resemble a mouse perfectly. Furthermore, it’s not just made to look like a mouse, but made to look like a swimming mouse, which really separates it from other topwater mice lures on the market. Every meticulous detail—from the fur-like textures to the eyes and pink nose—mimic a mouse perfectly. The Field Mouse even possesses sculpted front legs that are tucked near the body, adding to the realism.

The design of the Field Mouse enables it to be fished a number of ways. Of course, topwater lures of its kind are ideal for thick mats and lily pads, where anglers can slowly work them across the surface and pockets in the pads in an effort to trigger strikes. However, the Field Mouse can be worked just as effectively in open water and along shorelines, as it possesses a natural side-to-side motion that kicks up more water and attracts fish. Any angler would love this type of versatility, as it is a trait that is invaluable on the water.

Kopper’s LiveTarget Field Mouse is available in three color patterns (gray, brown, and black) and two different lengths (3-inch and 3 1/2-inch). It comes with a $10.49 price tag, which some aren’t too keen on, but there are hundreds of quality baits that run in that price range that anglers continue to buy and rave about year after year.

The only complaint I’ve heard since the Field Mouse’s release is that its hollow body can fill with water during the retrieve, which can cause it to sink. Whether this is a design flaw or just a few bad models from the factory, I couldn’t say. I wouldn’t let it dissuade you from picking one up and trying it out, though.

Whether you’re a believer in lure realism or not, the Field Mouse from Kopper’s is a bait that deserves a spot in every angler’s tackle box. Fishermen know that a quality topwater mouse is a deadly lure to possess and is a great go-to bait when cover is thick. Do yourself a favor and give this one a chance. I know you’ll be pleasantly surprised.