Fishing Without a License 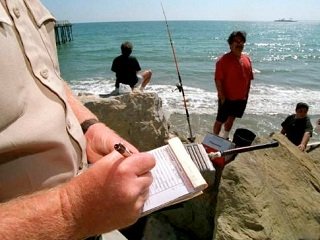 There are several laws and regulations that allow various aspects of the outdoors to be steadily maintained and run smoothly. In terms of fishing, such regulations are present in the form of keeper length, fish limits, season dates, and licenses. Don’t let the title of this article fool you; this is a warning to anglers who think that it’s okay to head out to their local waters without a license. Fishing without first obtaining a fishing license is a bad idea for many reasons, and I’ve listed a few of them for you today.

The first—and most obvious—negative aspect of fishing without a license is that doing so is against the law. You wouldn’t drive a car without a driver’s license, so it’s surprising how many feel they can fish without a fishing license. Laws are laws, and they’re in place for important reasons. There are a select few who aren’t required to have a license, however—anyone under 14 or 16 years of age (depending on the state), senior citizens of a specific age (depending on the state), and veterans in some states.

Cost is another big drawback to fishing without a license. I’m not referring to how much it costs to purchase a license, but rather the fines that can, and will, be charged should you be caught by a DNR agent. The fines vary in each state, with the minimum charge being at least twice as much as the cost of the original license. Furthermore, there is a chance your gear will be confiscated and, depending on your actions, potential further charges or even jail time. Whichever way you look at it, it’s cheaper by far to simply purchase a license than to be charged for fishing without one.

Branches of the government, such as the DNR, are funded in part by licenses obtained by outdoorsmen. The funds go towards the ongoing conservation and protection of your local fisheries and ecosystems, so showing support by paying for a license is the best way to ensure your own continual enjoyment of the waters, as well as future generations.

The bottom line is this: fishing without a license is irresponsible, lazy, potentially costly, and against the law. Any time you take fish from the water illegally, especially if you keep more than your limit or fish out of season, it does harm to the species and the local fishery. It may not seem like a big deal, but licenses and the conservation they go towards are a huge part of the outdoors. Do yourself a favor and be sure to not only pick up a license for each season, but also impart the importance of doing so to children or new anglers.