Lunar Cycles, Fishing, and You 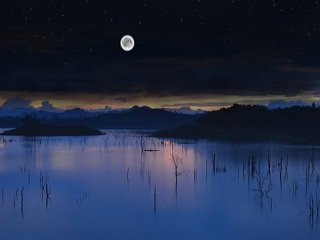 Spend enough time around fishermen and eventually the topic of moon cycles will arise. This concept, especially in relation to its effects on fishing, is something that anglers either closely monitor, or are too intimidated by the seemingly complicated realm of lunar cycles to get involved with them. At one time, I fell into the latter school of thought, but I’m here to let you know that understanding lunar cycles isn’t all that complex. Keep reading to learn more about how lunar cycles relate to fish activity.

Every fisherman “knows” that the best fishing times tend to be during dawn and dusk, but what often goes unnoticed are moonrise and moonset. Understanding this and choosing times when sunrise/sunset and moonrise/moonset coincide with new or full moon phases will enable you to increase your chance of a good catch. It’s simply a matter of knowing ahead of time exactly when the sun and moon will rise and set. Fish are most active during 90-minute windows surrounding each of these four daily events, which equals out to 45 minutes before and after these four daily points. Fishing during these four periods will help increase the amount of fish you catch, but if you’re able to be on the water on the days of new or full moon, you can use these windows of time to reel in massive amounts of fish. If you have to choose between sunrise/set and moonrise/set, always go with the moon as the moon is the stronger influence.

Most of what we read about fishing in accordance to lunar cycles sounds very complicated. I mean, many sites stress the importance of being on the water at exactly the right time, even to the minute, in order to improve your catch. Unfortunately, the average fisherman doesn’t have the spare time—much less the funds—to test it out. At least that’s what I thought.

If, like me, you just don’t have the time to be on the water at specific moments during the lunar cycle, all you’ll need to do is keep a log of your own fishing times over the course of a year or so. All information related to the moon’s phases, the weather conditions and the catches you make should be recorded. After some time doing this, you’ll notice patterns on paper that will translate into preparation and readiness when you hit the water next.

Other than the moon, season and weather changes can impact fish activity heavily. If a storm’s approaching, for example, or just after one has passed, and you’re on the water, you’ll be in good shape. Also, most fish are more likely to bite willingly during seasonal transitions with the transition from winter to spring and summer to fall being the two best fishing times. Keep these things in mind and get on the water as often as your schedule allows in order to gain a better understanding of how the lunar cycles impact the fish in your region and capitalize on it.