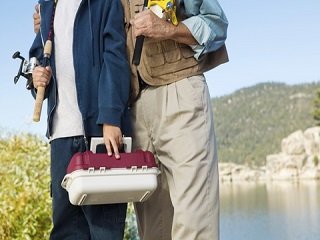 I’ll admit that when it comes to my lures, I’m a bit of a stickler for organization. I know I’m not alone in this habit, though. For proof, just take a stroll down the tackle box aisle at your local retailer. Not every tackle box appeals to each angler’s preferences and fishing activity, though, which can make choosing one or two out of a myriad of styles difficult. Today, we’ll examine each type of tackle box and what features each possesses.

The tackle box style that most people—anglers and non-anglers alike—are most familiar with is the fold-out. Fold-out or tackle boxes are the most popular and least expensive. They contain one or two tackle trays and a larger bottom compartment. A step above the fold-out is the possum-belly, which tend to be large, heavy, and more expensive than other tackle boxes. They are designed to hold everything most anglers need on the water and are a popular choice for both beginners and tournament fishermen. The next step up from a possum-belly is drawer boxes, which offer large storage capacity and don’t require as much clearance as a possum-belly box when opening the drawers.

Moving on from conventional possum-belly, fold-out, and drawer boxes, we have one-sided and two-sided boxes. Two-sided boxes have compartments on each side and offer large storage capacity for their size. One-sided tackle boxes are smaller versions of the two-sided models for use when less capacity is needed. Most anglers use a few of these to hold large quantities of specific types of lures. Along those same lines you’ll find utility boxes, which are inexpensive plastic boxes designed for a wide variety of storage needs, such as holding small tackle items.

It can be easy to make a mistake when choosing a tackle box. Inexperienced fishermen tend to buy a tackle box that’s too small, failing to anticipate a growing interest in fishing and, thus, a growing arsenal of tackle. Experienced fishermen, on the other hand, tend to carry too much with them. The trick is finding a compromise between these two errors. Rather than buying one giant tackle box to carry everything you own, buy two or three smaller boxes to contain certain categories of lures. Also, using seasonal boxes designed to carry only those lures you’ll use in a given season is a smart idea.

If you’re like me, then you strongly dislike wasting money on something you either don’t need or something you outgrow too quickly, and it’s very easy to do this with tackle boxes. Consider how often you fish and which species you predominantly target when making your decision and you’ll be in good shape.