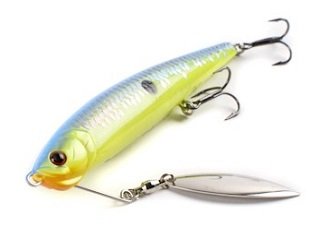 Last week, we began our series on some of 2013’s standout lures by taking a look at a few of the year’s less noteworthy, or just all around bad, products. Today, we’ll end the series on a good note by exploring a few of 2013’s more impressive lures. Keep reading to learn more!

Lucky Craft is a company known for producing quality—and expensive—hardbaits. In 2013, the company released an innovative lure called the Blade Cross, which bass anglers went crazy for. The lure is comprised of a hard twitch bait body, but with a subtle addition: a willowleaf blade attached to a spinnerbait arm that extends below the body. On a steady retrieve, the bait produces reliable vibration and runs true. However, you can also twitch it to create erratic action, or even let it drop on a pause, which enables it to spiral downward like a wounded fish.

Verdict: Everyone I’ve known who’s tried it raves, and from a company like Lucky Craft, you know you’re getting a quality lure.

When it comes to excitement on the water, there’s a lot to be said about using topwater lures. There’s just nothing like the explosion of a strike at the surface, and the Boil Trigger popper from Jackall was a fan favorite in 2013. The Boil Trigger is a longer, leaner popper, but it offers a jointed body that adds an element of versatility on the retrieve that other poppers and Spooks don’t. The lure also possesses internal rattles, which only heighten its appeal to lurking lunkers.

Verdict: With the amount of abuse topwater lures endure, as well as the higher risk of hangups, it’s hard to justify a $16 price tag, but the Boil Trigger’s reputation among bass fishermen speaks for itself.

Rapala is a lure company that really needs no introduction. Over the years, the company’s consistency in producing efficient, innovative lures has allowed it to achieve a nearly apex status. 2013 saw the company release a 1 ½-inch Ultra Light crank that dives to eight feet and has endeared itself to many anglers. River anglers I know are in love with the Ultra Light and conventional bass fishermen rave about the Ultra Light’s results when bass are feeding on baitfish, especially since it’s always been hard to get a smaller hardbait down deep.

Verdict: This one is kind of a no-brainer. Unless you simply have no room for the Ultra Light, or too many crankbaits, there’s no reason not to add this little beauty to your arsenal this season.

There you have it, folks; a sampling of the good, the bad, and the downright ugly of 2013. This past year saw some ambitious attempts from smaller companies, as well as some truly impressive products from reliable ones. As I stated in Part One, companies are constantly researching and testing to create new products that will help anglers catch more fish, so I hope you’re as excited as I am for what 2014 has in store for the fishing world!