Stalking redfish in shallow marshy lagoons combine tactics from bass fishing and hunting. In fact, redfish in brackish estuaries often feed on the same forage as largemouth bass and hit the same lures.

“Fishing for redfish is a lot like fishing for bass,” advised Lonnie Stanley, a five-time Bassmaster Classic veteran and legendary lure designer with Stanley Jigs in Huntington, Texas. “I’ve never seen anything in my bass tackle box that a redfish wouldn’t hit. If a bass will hit it, a redfish will hit it. The strikes are so violent that it’s really fun to catch reds on artificials.”

“Sometimes reds are very aggressive and will hit anything,” explained Theophile Bourgeois of Bourgeois Charters in Barataria, La. “I have seen what we call ‘red tide,’ where we see 400 to 500 redfish feeding on the surface and they’ll hit anything that hits the water. Like in bass fishing, we catch a lot of redfish on topwater baits.”

“A redfish is a pig; it eats and eats,” remarked Mike Gallo with Angling Adventures of Louisiana Guide Service in Slidell, La. “I like walking baits with rattles in them. I like MirrOlure Top Dogs, but I like a Top Dog Pup better than the larger ones because it’s easier for a redfish to get into his mouth. A Super Spook is another good bait. I prefer natural colors. I like a white belly, silver sides and a green or black back. I try to imitate a mullet.”

Walking baits create scintillating surface action by bobbing and weaving from side to side. Poppers or chuggers displace water with concave nose surfaces. When jerked, they gurgle with considerable surface disruption. Prop baits thrash the surface, often annoying otherwise lethargic fish into striking. They come equipped with nose or rear propellers, sometimes both. While not technically “floating” baits, spinners or buzzbaits run over the surface also tempt big redfish.

People can also use soft-plastic baits on the surface. Rigged with hooks inserted into the plastic bodies and without weights, these lifelike baits slither through thick vegetation with ease. In very shallow water or extremely dense weeds, dance them over the surface. Sometimes, redfish explode up through thick weeds to engulf them, vegetation and all. 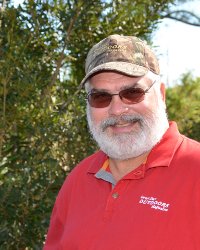 John N. Felsher grew up in Slidell, La, and now lives in Semmes, Ala. He’s a professional freelance writer and photographer with more than 2,200 articles in more than 138 different magazines to his credit. He also co-hosts a weekly live radio show every Thursday from noon to 1 p.m. Central Time on WNSP 105.5 FM in Mobile, Ala. and a recorded syndicated show that goes out to multiple stations in Alabama each week. (See www.gdomag.com) Contact him through his website at www.JohnNFelsher.com.