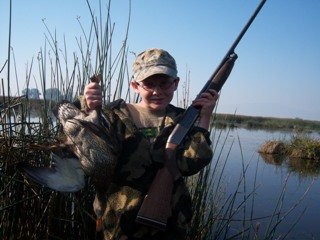 Introducing kids to the outdoors is one of the greatest joys of parenting. Since they were born, my boys have followed my comings and goings with interest and, ever since they could they could talk, they have requested to go hunting with me. Like most dads who love the outdoors, the idea of taking the kids along and eventually letting them participate and become full partners in the hunt has always been a priority.

Bringing kids up in the woods requires a little bit of thought to create a lot of opportunities. My oldest son came on his first duck hunt when he was just three years old. My plan was to take him on a short hunt with a good probability of success and it worked out great. We jump shot a small creek for ducks. There were two good spots within a couple hundred yards and my friend Tom and I bagged 6 ducks altogether in about half an hour. Josh got to watch our dog do her “real job” and stayed dry and interested the whole time. By the time we got home Josh had claimed the ducks for his own. Apparently he had shot them with his fisher-price carpenter’s square that served as his shotgun for the trip. Good times!

There are a few things to take into consideration. Keeping kids safe, comfortable and interested in the outdoors requires some basic planning. If you take a six year old hunting, don’t plan to stay out all day and don’t even head out for a short hunt in extreme weather conditions. I like to introduce kids to small game hunting where some success is assured whenever possible. Leave the mountain man elk hunts for a little later on. Proper gear is also a must and presents a challenge since growing kids might require new boots and jackets each year. Hand me downs are a true blessing though, so if you have more than one kid or even cousins get the most out of the gear by passing it around.

I’m sure that like me, you will encounter some challenges with the kids. That’s the nature of the outdoors. Time spent outside hunting and fishing with your kids is irreplaceable and it will be remembered long afterwards, even after you’re taking their kids out for their first adventures in the wild.

SHARE
TWEET
Kids
previous articleInline Spinners on the River
next articleCycling: Your Ticket to Nature and Better Health