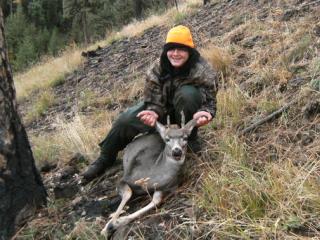 I am currently under some small and encouraged pressure from my wife and middle son to help them produce their first deer success in a timely manner. My wife has been hunting for two years now while my son Pierce turns 12 next year and can hunt big game at that time. I welcome the new hunters in the family and try to encourage their interest and their chances. My wife and I missed an excellent chance this year by a couple seconds when we rattled a small buck within 20 yards.

My oldest son bagged his first buck after two years in deer camp. The first year Josh stepped up to the plate in a big way. He was 11 and I had my doubts. However, his football coach is largely to blame for his success. After football season, we started hitting the long trails day after day and it wasn’t a stretch at all. We hunted for a solid week without a chance at the two small bucks we saw. It was only the second season I had come home empty-handed from our trip to the east.

The second year started out differently. Deer camp was fuller than ever with several kids my son’s age. Opening morning there were deer in camp and the next morning we had a good plan to walk several miles straight out of camp to a prime draw. We skirted the top of the draw and left my brother where he could watch the bottom section. The draw was about 300 yards across from ridge to ridge with pockets of timber and mostly open grass spaces. Prime deer country.

We settled in behind a large log and I set my daypack up for a rifle rest. Josh soon spotted three deer coming out of the timber below us. They crossed the bottom of the draw right under us at 80 yards and headed into an open timber patch. We were able to identify one as a small buck, however Josh couldn’t get a shot off. We could see the deer feeding around in the timber, and unless they left the timber running the buck was ours. We ranged the likely exits and waited.

Eventually the deer fed out into the open, and after a quick lesson in remembering to flip off the safety, Josh leveled the buck with one shot from the .30-.06.

In our family it’s a given that the opportunity will be available, perhaps in yours too. Remember that many kids and even adults that are interested in hunting have not had the chance to really get out and learn woods craft. Do what you can to make sure friends and their kids have the chance if there is an interest to connect to the wilderness in the way that only hunters can.