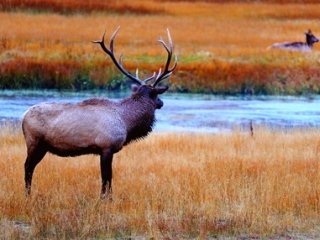 At daybreak on the third day of Oregon’s Mule deer season my hunting partner Justin spotted three bucks, including a wide forked horn and a heavy bodied four point. The bucks started to move out and we missed with a couple of hasty shots. We were able to track about half of their progress across the valley, a distance of about 2 miles. The smaller forked horn peeled off into some brush on the way down the draw. I had followed the two bigger deer to the bottom of the draw and Justin and my brother were descending towards the smaller forked horn. We had this one fairly surrounded. My brother shot the smaller buck around ten that morning. We helped process the deer and later looked towards the opposite wall of the draw. Justin asked me if I thought the deer went all the way out of the drainage, and we both decided it was likely they had holed up for the afternoon in a brushy side draw that was still in the drainage. The decision was made and we headed after them. It was around 1pm when Justin and I topped out on the next ridge to glass for the bigger bucks in the promising draw.

After about an hour of glassing we picked out the two bucks around a thousand yards off too far for a shot. Our position on the ridge was good and we skirted behind the ridge to close the difference. Once we got near our chosen shooting position we left our packs and jackets and crawled out to the edge. The distance was 350 yards across a small draw. We had the time to set up well. Justin was set on filling his tag and took an extra clip out of his pocket and set it on the shooting log we had picked. “Let’s try to shoot the four point first, and then that second buck isn’t getting away!” Justin and his family heavily subsidize their freezer with venison each year. I try to as well. It was crunch time.

It took us over an hour to pick out the first buck and closer to two hours before we could get a shot. We could never see both deer at once due to the brush. They would take turns laying down and repositioning. Finally the four point presented a broadside shot. I snugged down around the base of a four foot stump until my crosshairs didn’t move at all. Settling the crosshairs just under the top of the deer I squeezed. The deer folded and kicked only twice.

We expected to see the second deer flee. Instead everything stayed still. We watched for ten minutes and even stood up and hollered once. The bigger forked horn must have snuck off? We radioed back to camp for pack boards and started on our way across the draw to my deer. Suddenly the third buck appeared, bouncing towards us, broadside at 40 yards

“Justin, your buck!” I blurted. His rifle instantly came to his shoulder and barked. The deer flattened out from midair to the ground. Two seconds later it came back to life, missing one antler. Now the deer was flat out running. The second shot dropped it.

About that time the radio crackled, “You guys need anything else when I bring these pack boards?”

“Yep, bring another guy and make sure we all have packs. There’s two big deer down!” The sun was setting rapidly and by the time we reached the two and a half mile trail it was full dark. Sometimes the long days are the good days.