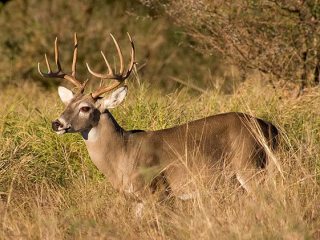 There was still a half hour till daylight when the truck dropped me off at the wood’s edge. This was only my third time hunting this exact drainage. My dad Jerry and Justin headed to drop the other “drivers” (still hunters really) off and head for stands at the bottom of the draw 10 road miles away. The draw, as they were calling it, wasn’t more than 4 actual miles in a straight line, but in this country, straight lines exist only on maps. It’s all uphill to the actual crest and then it’s a looping draw bending to the right with side canyons and timber.

How these hunts happen is part military planning, map work, woodsmanship and part voodoo economics. Years of experience have shown where SOME of the deer may show up as the still hunters work through the long hunt. Often times one of the still hunters will simply shoot a buck without ever pushing animals down the hill, or follow some deer completely out of the draw for a while. Near the bottom of the draw though, things tighten up and come together. Quite a few deer filter through near the blockers, who in our party are usually the older guys with cool, safe heads and maybe the ones that can’t push the hill quite as hard any more.

We usually end the hunt at 10:30 by the big oak or some other such landmark that exists only because half of the hunters know where it is and it’s been explained to the rest of us. There may be stragglers or guys that end up getting picked up on the road after a “slight detour.” Someone will always spot or shoot a buck and the plans are flexible. Woods time doesn’t operate the same as the time clock at the factory. Sometimes things wrap up quick, but more often, they stretch out until the hard work after the hunt is done. A time or two, the morning hunt has ended up miles away long after dark, skinning and packing. A rewarding and tough day’s work!