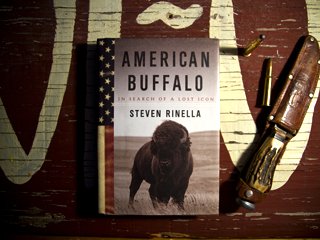 A few months ago, I wrote about author Steven Rinella’s year-long culinary quest for the odd and delicious in a review of his book The Scavenger’s Guide to Haute Cuisine.This January, as part of a field experience class at the University of Montana, I’ll be snowshoeing into the back-country of Yellowstone and talking with park staff about the winter use of park resources by the variety of wildlife in the park. In particular, we’ll be discssing the way that bison use resources like the ever bubbling hot springs and geyser pools.

In anticipation for this experience, I decided to add another of Rinella’s works to my winter reading list: American Buffalo. In this,his second book, Rinella recounts the origins of his fascination with bison while chronicling a once in a lifetime hunting opportunity for a wild bison along the Copper and Chetislina rivers near Wragnall-St. Elias National Park in Alaska.

Rinella begins the book with anecdotes about the unique scent wafting from a buffalo chip fire he has crafted to render bison cracklings out of the fat from his fresh kill:

“At times I’ve dipped my face into the smoke and picked up the odors of cinnamon and cloves, dried straw and pumpkins, and sometimes the smell of walking into a bathroom after someone smoked a joint.”

Rinella recalls on page one. He goes on to describe the downed cow bison he is now carving pieces from for what he calls “the real original American meal.”

“The heat of the fire liquefies the fat and leaves the cracklings floating in the oil of my pan like if you melted hard candy and all the wrappers came to the surface…With a bit of salt, the cracklings taste like pork rinds but much better. They taste wilder.”

This “wilder” theme is pervasive throughout the book. As Rinella traces the bison’s history across the Baring land bridge and into the American psyche, he frequently shifts gears to tell us how the bison worked its way into his life, and eventually into his freezer.

American Buffalo is one stop shopping for just about everything you’d ever want to know about bison and a fair amount of trivia about the people surrounding the demise and survival of the plains buffalo. Plus, sometimes, even trivia about rock bands with buffalo in their name. Regardless, Rinella has woven together an incredibly entertaining and inspiring book about a true American icon that is fit for any outdoorsman’s collection.