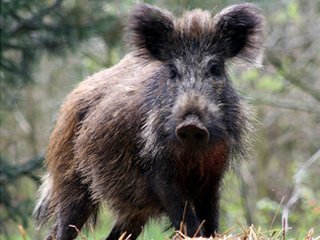 Forget Arkansas, Texas and Georgia for your next wild boar hunt. Head to Berlin!

Yes, the city of Berlin, Germany has apparently become overrun with wild boars. According to a Guardian article, inner city Berlin has become an attractive location for boars to roam freely in search of garbage, gardens and even cemeteries in which to root around.

The up to 300 lb swine have a long history of occasionally invading the city, but recently because of warm weather trends and a thriving human population rife with delicious refuse the population has skyrocketed to around 9,000 animals in the area. Apparently the roaming critters are much like raccoons or rats in most cities in the U.S. They root through garbage, accidentally get into people’s buildings and run out into traffic. The Guardian points out that last year boars were responsible for around 15% of all car accidents in Berlin.

The city has been backed into a corner by some citizens who feed the boars and further habituate them to city life. The city has put a price on piglets under 15 weeks old in an attempt to get ahead of the breeding curve and reduce the population. Needless to say this tactic has it’s detractors. Nonetheless, hunters by the dozens have been hired to cull adults and piglets alike but face harsh criticism and harassment by some citizens who believe the practice is inhumane. In fact, York Kotulsji and Andreas Konig conducted a study that showed a full ¼ of Berlin’s population would rather live with the pigs than have them hunted and killed.

There have been other proposed methods of controlling the population similar to the way federal agencies in the U.S control wild horse populations with contraceptives. But these techniques are not always practical, or affordable.

Off the top of my head, I can think of at least a dozen ham-loving hunters who would relish an opportunity to bag a few wild-boars in an urban environment. And, I can’t think of a single one of them who wouldn’t mind a little harassment in the processes. After-all, they’d get to fly home with several boxes of frozen pork when the job is done and let the German media hash out the details. Frankly, I smell a perfect business opportunity for an outfitter to set up shop providing “unique hunting experiences for the civic minded sportsman,” just so long as they can sprechen ze deutsche.

Read More about the Berlin boar problem at: www.guardian.co.uk/environment/2011…0/berlin-hunt-wild-boar/