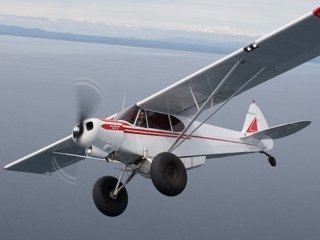 There have been libraries written about scouting for deer. Everyone knows that you can use game cameras, topographic maps, and online satellite photos. The subject is tired and worn out, but don’t fall asleep yet, because I want to suggest a proven scouting technique that is so simple, it is genius. I have used this technique for years in Midwest, Pacific Northwest, and in Alaska, and you can to. It’s called an airplane, and using one to scout is way more affordable than you might think.

Unless you are a pilot, you will need to hire one to fly you over your target area. Trust me when I tell you it is affordable, because truth be told, there is a hungry flight instructor waiting to take you airborne in almost every decent sized town in America with an airport. They charge by the hour and you would be surprised how much you can get done in just a half hour of flight time. If you share a lease or hunting property with someone else, you can minimize the flight costs by splitting the bill. Not only will you be helping out a kid trying to build flight hours and experience, but you will be helping out and supporting general aviation.

Be careful regarding pilot friends though. If you happen to have a friend who is a pilot, that situation might not be the gravy train you think it is. The Federal Aviation Administration (FAA) has very strict rules on paying friends and family for rides if they are not commercial pilots, so if you happen to use a friend or family member for a pilot, make sure everyone is well versed with the FAA regulations.

Now that you know where to find a ride, I will tell you how plane scouting can make a difference in your deer scouting success. I once was the proud lease holder of a thousand acre lease in the state of Kansas.  This place was Whitetail central but it was way too large for game cameras to cover, and I needed to find out where deer were feeding fast since the opener was days away.  I hired a flight instructor to fly me over the property at dusk, and my target areas were all the open fields, and if we had time, I would check out any possible activity at all my neighbor’s properties.

Since we were not flying over any houses or people, we were able to fly at about 300 feet of elevation. This was the first time I was acting out this fantasy of an idea, so I was nervous. That feeling ended as we found ourselves over the target area in the little Cessna 172. In the first field, there were deer feeding plain as day. Since they were used to hearing airplanes, they never even paused or looked up as they fed. To my surprise, there was a monster buck, and I was elated. I felt a little guilty, like I was cheating, because it all seemed so easy and so basic. It changed the way I scouted, and even now I will pay to take a scouting ride even if I don’t need to. After all, it is a great excuse to get an airplane ride.