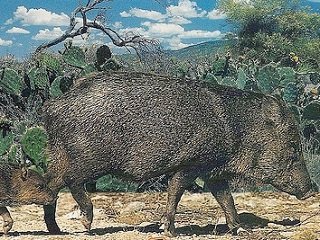 The hunting community rightfully claims fall and winter as hunting season; however, spring time in Texas is worthy of being regarded as a runner up to our great fall hunting tradition. In other parts of the country, wild turkey hunting is the only game in town, but in Texas, there are opportunities to kill not only turkeys, but also wild hogs and Javelina.

Not only does Texas offer this spring variety, but it is somewhat affordable to the average person. About one and a half hours outside of San Antonio, Texas, Jody Starr is offering hunts where a hunter can take all three species, and he does it on over 30,000 acres.  Not only does Jody offer affordable hunts for a trio of animals, but he also houses and feeds his hunters and his outfit will take care of your meat and trophy care as well.

So how successful can this hunt be? “Right now I would like to say we are running about 90% success rate. I actually think it is better than that, but I will say 90% just to be on the safe side,” says Starr. If you are wondering when exactly hunters can plan on having a chance at the three species, Starr says, “Usually from mid-March to the end of April is when hunters can expect to take home all three animals.”

Starr also offers discerning hunters a rare chance that most outfitters don’t. He lets responsible hunters kill all the hogs they want as long as they take all the meat home with them. He lets hunters bag two Javelina, so combined with a turkey; this is truly a Texas spring safari. Starr offers one more option. “I offer guided hunts, but I also offer semi-guided hunts.” So, not only is this safari affordable, Starr takes it a step further in affordability by offering semi-guided hunts for a reduced price than the standard fully guided hunts.

We all know that the economy is not what it once was, and most people are tightening their belts are having to adjust to spending less on what is important to us.  If you are a hunter wanting to get the most ‘bang for your buck,’ then it is almost crazy to not take a good look at what Starr has to offer.