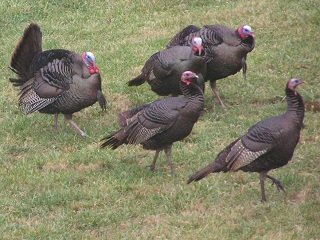 I have guided hundreds of hunters in their quests for a turkey, and the honest goal of most of these hunters was to kill an average gobbler, even though they would have been tickled with a monster longbeard. The simple fact is that most successful hunters don’t kill giant longbeards (turkeys who reach the age of four or five years old), but rather, they kill nice gobblers with 9 or 10 inch beards. In most situations, these turkeys are actually two year old birds. Knowing this fact will help you be more successful as you can specifically target these two year old toms with deadly results.

I have mentioned it before, but all turkey guides have a saying, “Thank God for two year old turkeys.” Two year old turkeys are old enough to have nice beards, tails, and heavy body weights, but they are young enough that they have not been educated to the ways of hunters like older birds have been.

To put it in simple terms, two year old turkeys are easier to kill and they make nice specimens.  So, by the rule of deduction, most hunters who score a tom turkey are going to be killing two year old birds. Here is one simple technique guaranteed to improve your success. It is not a magical trick and it requires no special skill. I call it ‘patience.’

I am not referring to the general concept of being patient; I am talking about a specific time to be patient for these birds. Trust me; it works during almost every attempt, barring any interruptions from people or predators.

When you find yourself during early and mid-season making your first calls of the day and getting answers from birds that seem to be everywhere but in your lap, the battle is already half won.  Most hunters get excited and start over calling while wondering why all these supposedly interested birds are not showing up, but this is a mistake.

Although it takes skill, the gobbles of a two year old can be distinguished from those of a young male turkey (jake). Jakes are slightly higher pitched and whiny, while two year old birds have a gobble that sounds more refined and disciplined.  Once you hear the excited call of a two year old, it’s time to wait because he will show up, but it could be a couple of hours.

The two year old bird is still a part of the flock; however, he is more independent and after feeling an obligation to the flock for the first couple hours of the day, he will start wandering off and exploring hens for himself out of the sight of dominate gobblers and out of the control of bossy hens who control the flock’s ground operations.

So, if a two year old answered your call at daylight, he will almost always come back to that exact spot and check up on that lonely sounding hen call after he leaves the flock. It takes a couple hours, but nature will force him to come investigate, so if you find yourself calling to a bunch of gobblers some morning and you get restless and frustrated as they stay out of range, sit tight and wait for the bearded visitor that can hardly wait to come check you out.