Kids and the Future of Hunting 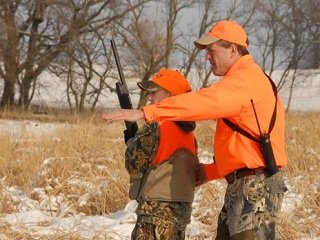 Since the early 1990’s, one of the hunting industry’s most popular and successful representatives has been soberly saying, “Take a kid hunting and fishing…” at the end of all his TV shows, videos, and DVDs. This is easier said than done.

It should be no surprise that a significant portion of hunting video productions and multi-media do not actually feature youth hunting or fishing. This fact is a perfect example of the collective relationships between the average hunting adult and the average hunter of the future, families notwithstanding.

There is nothing easy about taking a child hunting. It not only requires extra time and patience, but it also calls for the adult to sacrifice some of his/her own hunting funds and time. This is getting harder and harder to do with today’s economy and the hunting industry inflating the value of what a deer is worth. There are lease or property costs to consider, travel expenses, license and tag costs, and several other miscellaneous expenses as well. The bottom line is; although it is a worthy endeavor, it is difficult to commit to spending time mentoring a kid in the outdoors.

Everyone knows that children are literally the future of hunting. Hunters need to grow more hunters to preserve hunting.  According to the National Shooting Sports Foundation (NSSF), the number of young hunters is declining. The NSSF claims that out of every 100 hunters today, there are only 69 young hunters coming up to take their place. The NSSF also claims that the declining hunter numbers will drastically affect future of wildlife conservation funding. They claim that by 2025, funding will be reduced by 25%.

This is just more proof that the longevity of hunting is conditional and it is entirely up to hunters to replenish their own ranks.

The act of simply encouraging adult hunters to mentor young hunters is not going to fill the upcoming void. Hunters must police themselves and raise the standards of how they will pass the torch to the next generation. This will have to be a self-imposed elevation of standards and it will require most hunters simply wanting better for themselves and their sport.

When state wildlife programs start experiencing funding shortfalls, cuts in services and programs will undoubtedly be made. This will mean less hunting, less law enforcement, and less actual management of the very herds that hunters have worked over a century to help save, enrich, stabilize and prosper.

The ugly truth is that hunting is declining and hunter’s numbers are shrinking. In short, hunting is dying, so what will you as a hunter do about that fact? Whatever it is, it better include kids.