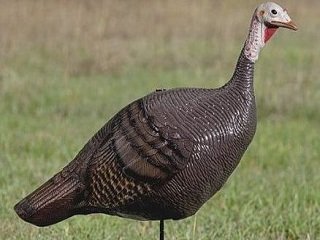 In almost every part of the country, it has been exceedingly warm as winter transitioned into spring. For the most part, wild turkeys have had an early breeding season. What this means to the average hunter is that the usually fast-paced, vocally active time period known as “opening week” has come and gone and this year’s turkey schedule is way out of whack.

Unfortunately for me, the turkeys I have been hunting in the Midwest have proven this true and what have traditionally been my turkey hunting hot spots, are now desolate wastelands of silent birds avoiding open fields and hiding out in the cover of brush and timber. The hens are all nesting and the dominate gobblers have figured out that their strutting zones are becoming less and less frequented by needy hens finishing up their breeding cycles. And the final cruel twist is that all the satellite long beards are holing up and even jakes are staying quiet and out of sight.

If you are finding yourself in this odd hunting situation, then start making like a space alien and probe your way to a trophy tom.

I learned the probing tactic during my several years of guiding turkey hunters in both the West and Midwest. The key to victory is to locate where the birds are roosting, which means you will have to find them in the late evening after fly-up or early in the morning as they wake up right before first light. Most toms try really hard to stay silent on the roost during this time of the late season, but they cannot help themselves if agitated by an aggressive crow call or an owl hoot. Make sure you have these calls in your arsenal and they will pay for themselves in short time.

Chances are very good that the birds will be roosting a little deeper in the timber than normal and that means that they will more likely be hanging out in those woods after the morning fly-down.  Now that you know where they are, you will probably not hear them again for the rest of the day. Even the jakes will know to stay silent. This is when you need to start probing the perimeter of the hang-out zone.

You will want to keep a low profile. When I probe, I already know where the birds are so I try to crawl the entire time.  To avoid noise and cut down on the blood-sucking ticks, I try to stick to deer trails as I slowly crawl. I usually do not call at all until I need a response, and only then do I let out the softest single or double yelp that I can possible make. I usually get a return  ‘putt’ call from a courteous bird who is try to let me know that ‘we are over here, so keep coming this way.’  I almost never get a gobble, but you might, so expect one. Also, don’t rule out complete vocal silence from the turkeys so listen for other clues that turkeys are nearby such as ground scratching, wing flapping, dusting scrapes and feather-adjusting body shakes.

Since most of the hens are nesting, the chances are good that any return call will be a tom and that is all the information that you will need to know. When I am probing and get a return ‘putt,’ I will painstakingly contort myself into a shooting position and start scanning.

If you are not picking up signs of close-by birds, extract yourself from the situation and probe from another location.  It is not uncommon for late-season birds to hang out in a couple hundred square feet during the entire day so think of their safety area as a wagon wheel and if you are not locating birds, then back out and approach from another direction of the spoke pattern.

Not only is probing highly successful for hunting shut-off turkeys, but it just about the only way to hunt them. Hunt long and prosper.